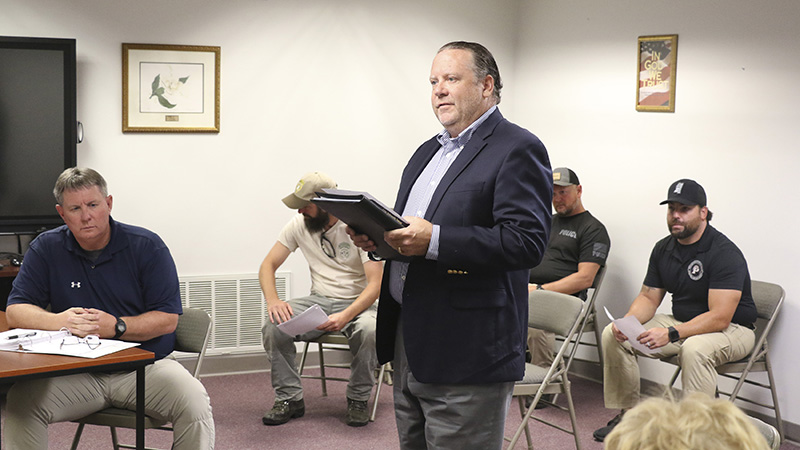 Larry Seal addresses the Picayune School District’s Board of Trustees during Tuesday’s meeting to request the Lee-Tripplett Stadium be renamed Memorial Stadium as it was in honor of four former football players who died while fighting in WWII. Photo by Jeremy Pittari

A community member addressed the Picayune School District Board of Trustees earlier this week to ask the Board to consider changing the name of the football stadium back to it’s original moniker that recognized the deaths of four Picayune residents who died while fighting in World War II.

Larry Seal said the stadium was previously named Memorial Stadium in memory of four former Picayune football players who served in the military during WWII and gave their lives. Those men were Raymond Luther Goodwin, George Sebron Johnston, Charles Wilmon Stuart, and Robert W. Barnes, Seal said in a column he submitted to the Item.

At some point in 2016, the stadium was renamed to add Lee to the name of the Lee-Tripplett Stadium in honor of two former football coaches. Seal said he can’t find a timeframe in the past when the Board renamed the stadium to Triplett Stadium.

Tuesday during the Board’s regular meeting, Seal addressed the Board and asked them to change the name back to Memorial Stadium, and cited Mississippi Code 55-15-81 which states the name of historical locations, especially those recognizing with military wars, placed on public property, including schools, can not be renamed, relocated or rededicated.

The Board took no action on the request but did continue with the agenda.

Seal said that if the Board declines to change the name back, his last resort may be to file a suit with Chancery Court.

He said he would like to thank the Mississippi State Department of the American Legion and the Veterans Legal Services of Mississippi College School of Law for helping him conduct research on the matter.