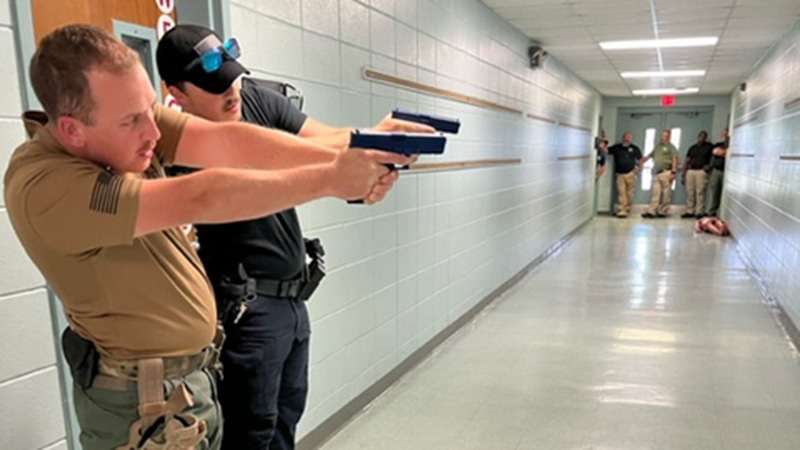 Justin Miller with the Pearl River County Sheriff’s Department said the two day course focused on having members of law enforcement, fire response and EMS train together so they can better respond to situations where victims need aid and law enforcement is needed to protect the community in emergency situations, such as an active shooter event.

Officers learned the basic skills required for room clearing, incident or suspect response and how to breach a room through doors, windows or other points of entry.

While the training was held on the campus of Nicholson Elementary, the training covered how to breach a variety of types of buildings, including schools, churches and businesses.

Other skills learned in the training included tactical medical procedures such as methods to apply a tourniquet and blood loss control to ensure those personnel are prepared to save lives, Miller said.

Personnel with fire services and EMS got separate instruction on how to integrate with law enforcement during a situation where incident command is needed. That focus was to ensure they know where to station to best extract victims and set up casualty treatment areas to triage the injured so the critically injured receive treatment first.

To simulate live fire situations, paint gun style weapons were used by the officers during the training, and simulated explosives were also employed to act as mock booby traps.

Miller said the training went over six full scale scenarios so they could simulate situations that have multiple assailants and/or explosive devices.

The training session was based on the ALERRT program, which is a national standard for preparing for active shooter situations or attack events.

By training together, the first responders learned that it is important to have a plan of action and work together effectively.