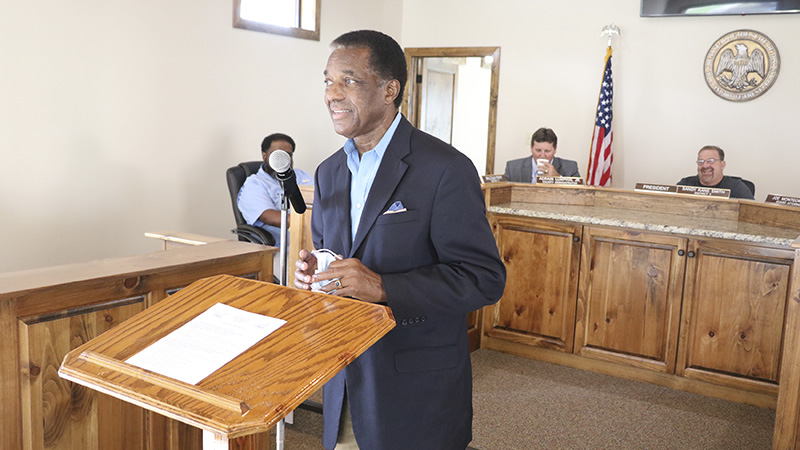 Pearl River County’s Board of Supervisors accepted a large donation from the Lower Pearl River Valley Foundation that will be used to improve several parks in the county.

Lower Pearl River Valley Foundation President Clyde Dease said the organization is always on the look out for innovative projects that will benefit the community. When he heard from Pearl River County Economic Development District Project Manager Administrator Christy Goss about the need to conduct repairs to several parks in the county, he brought the idea to the LPRVF Board of Directors.

When the members of the LPRVF Board of Directors saw the number of parks that needed renovation work, they thought it would be an outstanding project to ensure the public would continue to have access to the parks.

The grant, totaling $101,676, will be used to conduct repair work to the Henleyfield Park, McNeill Park, Carriere Park, a park in the Salem community, Spring Hill Park, Beech Community Center and the park in the White Sand community.

The Board of Supervisors also heard from Ed Sternod, president of Brothers Keepers Ministries, a food pantry in Poplarville. He asked the Board for some assistance in locating a truck and also informed the Board that food has been harder to get for the pantry in the current economy. The state of the economy has also caused more people to come to the pantry looking for food. He said 100 additional clients came to the food pantry over the past three to five months, now totaling between 700 to 900 people per month.

He also thanked LPRVF for a grant the food pantry received recently totaling $36,000. It appears the average age of those who come to Brothers Keeper Ministries are 70, and many have a look in their eyes as though they would rather not be getting food from the food pantry.

“Those are the people I want to make sure they have food,” Sternod said.

In relation to the condition of the delivery truck used by the organization, he said it has about 230,000 miles, and the cost to maintain it exceeds the value of the vehicle. The bill to conduct repairs on it recently, including tires and other repairs, reached $5,000. Due to the state of the truck, drivers are apprehensive to take the truck to Gulfport to pick up food that is distributed by the food pantry staff.

Each year the organization holds a fish fry to raise funds to keep the food pantry going, but with the rise in the price of catfish from $5 to $9 per pound, Sternod said the menu may have to change or the fundraiser may be canceled.

No action was taken on the matter by the Board, but Board President Sandy Kane Smith said he will keep an eye out for a truck that might suit their needs.