Council still has concerns about development after soil testing 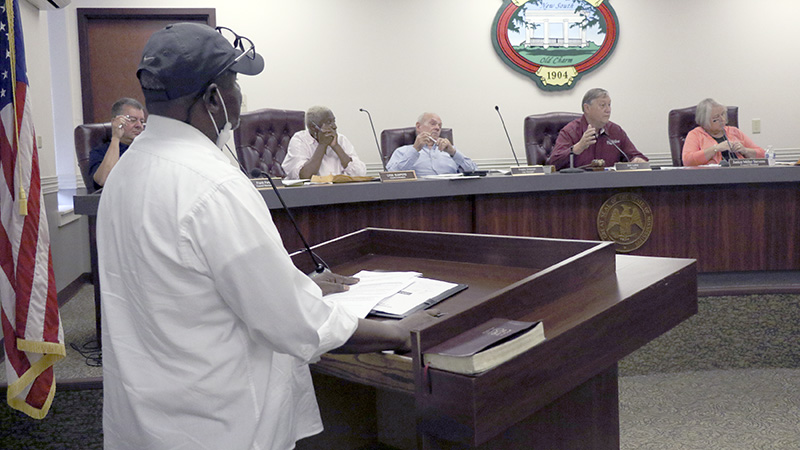 From left, Leavern Guy tries to address the Picayune City Council, but is asked by Mayor Jim Luke to take his seat after Guy lodged accusations that the Council is harassing him, making progress on his development more difficult. Photo by Jeremy Pittari

Concern over a piece of property slated for development off of Neal Road was expressed again by Picayune’s City Council.

Before the matter was discussed, Mayor Jim Luke said that a resident in that area, Ronald Jackson, wanted to address the Council. Jackson said he has a petition with names of those who are against the development due to concerns the property may be contaminated.

The development is being constructed by Leavern Guy and Melvin Hicks, and it is located next to a piece of property believed to contain an in ground tank.

Guy contends that the property where the tank is suspected to be does not belong to him and Hicks. However, since the Council approved a motion to require a test of the soil by the EPA or MDEQ before further work can continue, it was remanded back to the Planning Commission.

Tuesday night, the matter came back to the Council with test results and additional information on how the test was conducted.

Planning and Development Director Diane Miller said that the company that did the testing did not take the sample themselves, instead it was collected and submitted by Guy. Guy said he submitted the sample because he determined that the EPA and MDEQ do not conduct testing for private developments. Nicholas K. Thompson with Copeland Cook Taylor and Bush P.A., who was hired by the city after city attorney Nathan Farmer recused himself from the matter, said the EPA and MDEQ typically save any soil testing work for superfund sites.

Guy said there are other places in the city where underground tanks are known to exist but when development on or near those sites took place, the developer did not meet with as much resistance and harassment as he is getting from the Council.

At that time, Luke became irate and interrupted Guy, asking him to take his seat in the audience. Guy fired back, saying the matter was on the agenda so he had a right to speak to the Council. After more attempts by Luke to have Guy return to his seat, Luke turned to the city attorney. Farmer reminded Luke that he recused himself from the matter, so Thompson was addressed. Thompson said the Council has control over the length and access to public comments. Guy then took his seat.

Miller said she called the company that conducted the testing in Ocean Springs, and determined that Guy had two options, to allow a sister company to collect the sample, or for Guy to collect and submit it himself, the latter of which would save Guy money.

Councilor Larry Breland asked Thompson what would happen if the Council approved the development but later found out the sample was not taken from the development site. Thompson said there are still several steps Guy and Hicks must take before construction can begin, and the sample was submitted in the proper manner to ensure the proper temperature and timeliness. He added that so far Guy and Hicks have done everything they have been asked to do, the only question remains is from where the sample was collected. After being asked by Councilor Anna Turnage about the sample collection being done by Guy, Thompson agreed that if the sample had been collected by the sister company, there would no longer be an issue.

While the test did not find any contaminants or chemicals, the Council did not take action on the matter, instead deciding to table the matter until Councilor Lynn Bogan Bumpers can meet with people in that area to determine their concerns.

Councilor Frank Ford addressed Guy’s claims of being harassed, and said that as a former Councilor himself, Guy should be aware that the Council’s aim is to protect the citizens.