Council presents certificate to family of the “Mayor of Ponderosa” 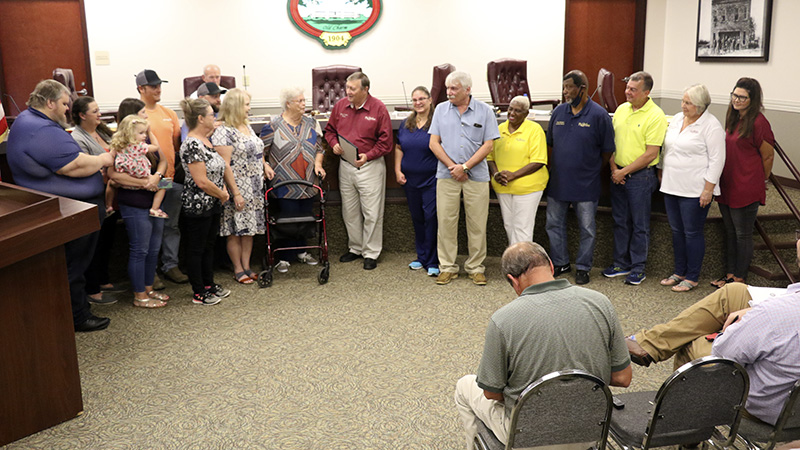 The family of Londell “Wimpy” Vaughn was presented with a certificate of appreciation during Tuesday’s City Council meeting for his efforts to ensure the Ponderosa neighborhood was safe. Photo by Jeremy Pittari

During Tuesday’s City Council meeting, the Council recognized the memory of a local man and a local Cub Scout pack attended to get their merit badge and participate in the meeting.

Mayor Jim Luke began the meeting by allowing Cub Scout Pack 2 to conduct the invocation and present the colors. He said they were attending the meeting as an effort to earn a merit badge for learning about local government.

Also during the meeting, Luke presented the family of the late Londell “Wimpy” Vaughn with a certificate of appreciation for all he did during his life. Luke described Vaughn as the “Mayor of Ponderosa” because he always looked out for his neighbors and community. Luke also described him as a long time local business owner, and “master gardener.”

The Council also heard updates from the city’s department heads about ongoing work and planned projects.

Fire Chief Pat Weaver said that since the last Council meeting, his department responded to 38 calls for service, of which 11 were for motor vehicle collisions, five were for fires and two were structure fire calls.

Code Enforcement Officer Ted Barzé said he has been dealing with temporary signs in the city. He said he has been picking them up, and instead of just throwing them away he’s been calling the numbers on the signs to have the owner collect them.

Barzé also said he has been addressing a number of recent complaints concerning high grass on some properties in the city.

Police Chief Joe Quave said his department responded to 746 calls since the last Council meeting, conducted 25 arrests of which 13 were for felony offenses and he said he began sending out invites for the community to participate in an upcoming National Night Out that is set for Aug. 2 at Crosby Commons. Quave said that any local civic club that is interested is invited to participate.

Special Projects Director Lisa Albritton said the movie night for the Fourth of July, complete with a fireworks show, was well attended. She thanked everyone who was involved, including Jason Glidewell for putting on the fireworks show, and the city employees who helped make the event a success. She also thanked Brooks Wallace with DebrisTech for bringing the screen for the movie.

She said the last movie night in the series will be held on Aug. 6 at Crosby Commons, and added that she is still looking for sponsors and vendors.

Public Works Director Eric Morris said the drainage project on Fifth Street is about 60 percent complete and is being completed using concrete rubble the city has had for years and is being repurposed for that project.

Striping on the parking lots recently installed at Leola Jordan Park and J.P. Johnson Park is complete, and work to renovate the electrical systems at two wells in town to accommodate the generator obtained from the Pearl River County Utility Authority under a memorandum of understanding is about 75 percent complete.