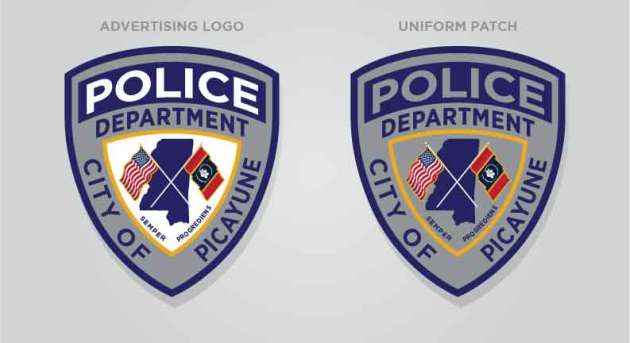 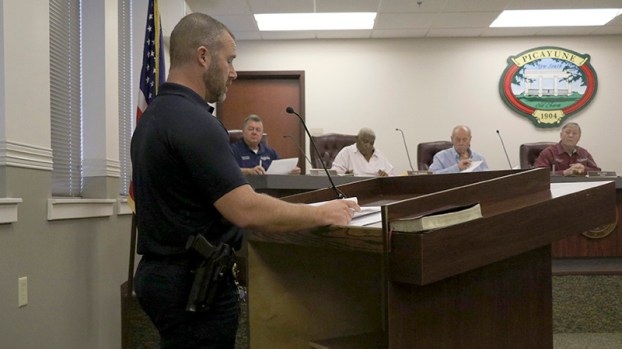 Picayune Police Chief Joe Quave presents the City Council with a new logo and patch for his department, created in conjunction with his officers and Barousse DeSigns. Photo by Jeremy Pittari

A new logo and patch for the Picayune Police Department was approved by the City Council during this week’s meeting.

Police Chief Joe Quave presented the new patch and logo to the Council during Tuesday’s meeting. He said that according to his research, the patch and logo is typically updated every 20 to 25 years. He started that process at the request of his fellow officers, who helped provide input into the design with assistance from Barousse DeSigns.

The new logo is described as being contemporary and incorporates the state and United States flag along with the Latin term “semper progrediens,” which translates to “always progressing.” The Council approved the new logo and patch.

In other business, Quave said during the last couple of weeks, officers responded to 840 calls and conducted 22 arrests, of which seven were for felony offenses.

He is also still getting ready for the return of National Night Out in Picayune, an event held annually to give the community an opportunity to get to know the members of local law enforcement agencies personally. It was held annually in Picayune until the event was put on a hiatus. It will be held on Aug. 2 at 6 p.m. at Crosby Commons and the public is invited to attend.

Fire Chief Pat Weaver said the city’s firefighters responded to 37 total calls, of which 18 were medical in nature, and seven involved collisions. Of those collisions, four involved injuries.

Planning and Development Director Diane Miller gave the Council an update on the previously reported establishment of a location of the grocery chain Aldi in Picayune. She said the parent company has worked out the issues with wetland mitigation and is in the process of getting land and other permit requirements met. She said the company has posted 52 job openings.  She also had news about the planned construction of a location of Arbys in Picayune. The old building on the proposed lot where the restaurant chain will be constructed along Memorial Boulevard is now vacant, opening the way for the next step in the demolition of that old facility.

Within the Parks and Recreation department, Parks Director Trevor Adam thanked the Police Department’s officers for assisting his staff in ensuring Friendship Park is closed at night. Their help allows his staff to focus on other tasks.

Special Projects Director Lisa Albritton said she is still getting things ready for the last movie night of the summer. Set for Aug. 6 at Friendship Park, civic groups and local businesses, such as the Exchange Club of Picayune, M&M Printing and Coldwell Banker will be on site to provide school supplies to children. She said there will also be vendors from Outfielders Pizza and Nell’s Sweets & Treats.