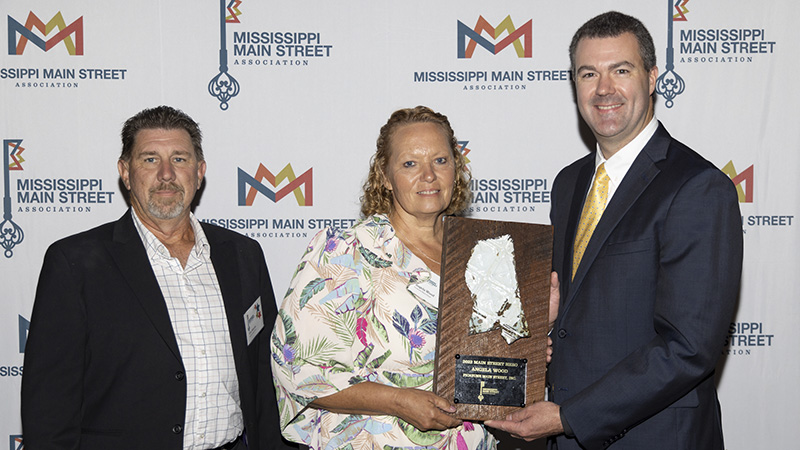 A long time employee of the city of Picayune was recognized for her efforts to make the city a bit more bright through her work in maintaining and establishing dozens of flower beds.

For more than two decades, Angela Wood, the city of Picayune’s Director of Beautification, has been creating eye catching flower beds that many citizens enjoy. For her efforts, she was recently awarded the Main Street Hero award from Mississippi Main Street Association.

Wood said she became employed with the city of Picayune 23 years ago when Kay Johnson was the city manager to become part of the city’s beautification department.

Since then, several improvements have made her job easier, and have also saved the city money. One such change was the establishment of green houses at the city barn. There she and her coworkers raise the next season’s plants from bulbs, which is far cheaper than buying them in a fully grown state. She estimates that change saves the city about $50,000 per year.

Those greenhouses were provided to the city at no cost by Mississippi Power, who donated two carport structures, and Pearl River Central School District, who provided two greenhouses, according to a press release from MMSA. Those donated structures were disassembled by city employees who reassembled them to serve as the greenhouses that provide plants for the city’s more than 70 flowerbeds. Completion of the greenhouses was accomplished using city funds, the sale of scrap metal and sale of surplus equipment. The greenhouses are equipped with fans, gas heat, and automatic irrigation, the release states.

When selecting the next batch of plants, she researches the types of plants that are best suited for the heat and other factors of South Mississippi climate.

Each season the beds are replenished with new plants and new mulch. Wood estimates that it takes them about three hours from start to finish on a flower bed. As the bed is established, she said she works to layer the plants by height, and then takes it from there by eye.

Sometimes there are unforeseen challenges. One instance is the flower bed at the corner of Highway 11 and Fourth Street, where an old oak tree once stood. Public Works Director Eric Morris said when the tree needed to be removed, the city used dirt that was already on hand to establish the flower bed that is there today. However, the dirt was littered with seeds from weeds, making tending to the bed very difficult. After the city removed that dirt and installed new dirt, the number of weeds that pop up has been significantly reduced.

Wood said her department typically weeds and waters every flower bed in the city once a week.

With temperatures rising as summer drags on, Wood said she has to drink a lot of water and sports drinks to stay hydrated, and when she and her coworkers get tired or too hot, they take a break.

All this hard work was recently recognized by Mississippi Main Street when Wood was given the Main Street Hero award, which recognizes a community leader who displays commitment to their city’s downtown area.

Morris said he appreciates the hard work Wood puts into the flower beds and Mississippi Main Street for supporting local communities by recognizing outstanding efforts with these awards.

“I respect the job she does and Picayune is better for having her,” Morris said.