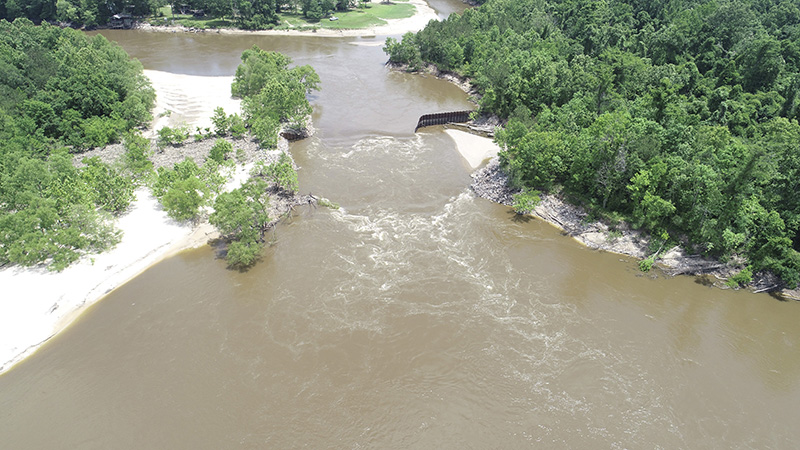 With the flow of the water at Wilson’s Slough continuing to head more towards Louisiana than Mississippi, drone footage was recently taken to see what can be done to rectify the problem.

Les Dungan with Dungan Engineering showed the footage to the Board of Supervisors to demonstrate how much damage the weir has suffered due to erosion.

Dugnan said over the last three weeks, he’s been able to make some headway with the Corps of Engineers, Louisiana Fish and Wildlife and other government organizations that will need to be part of the repairs.

As the footage in the drone footage showed, a lot of the rip rap installed during the initial project back in the 90s has been pushed down stream. His proposal is to implement sheet pile reinforced with high beam piling. He also hopes to be able to dredge the Mississippi side to prevent material from piling up in that area as it has been doing. There are still two to three issues that need to be answered before he can present a price for the repair.

District I Supervisor Donald Hart presented a potential tenant for the community center currently under construction on Beech Street in Picayune. The proposed tenant offers educational programs for people aged 16 to 24 that can help them get jobs in the fields of construction, certified nursing assistant, first responder, dental assistant and food safety.

Since a commercial kitchen is being installed in the facility, Hart said the center can double as a training faculty for those looking to get into the culinary field.

The Board also approved a motion to allow Mississippi Power Company to conduct improvements to the power system at the county courthouse totaling $35,000.  Byron Hill with Mississippi Power Company said the work will move the power lines from being on power poles to underground feeds with a generator. Another motion to move the power supply at the county fairgrounds to underground at a cost of about $16,000 was also approved. Hill said the change will eliminate three meters at the facility and get rid of a number of safety issues.