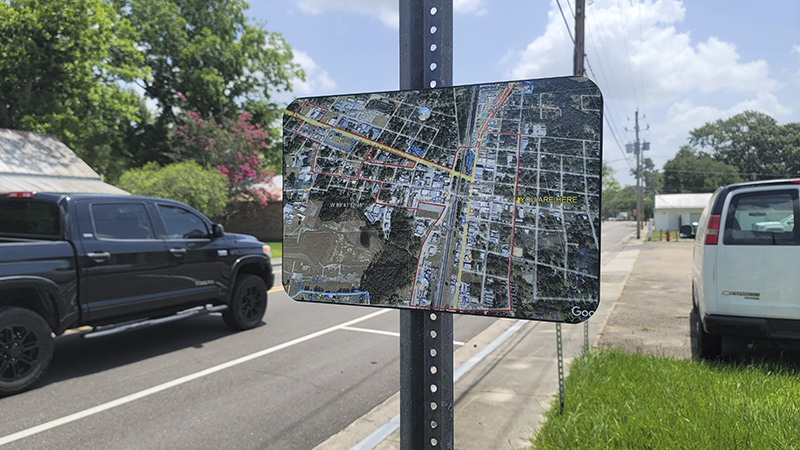 These signs have been installed at the intersections where a recently established recreation district has been set in Picayune. The signs, along with maroon stripes across the roads at these locations, alert pedestrians where the district ends. Photo by Jeremy Pittari

Pedestrians and motorists may have noticed new signs installed in certain areas of the city of Picayune, which denote the boundaries of a newly formed recreation district.

Public Works Director Eric Morris said the signs are of an aerial view of the city with an icon denoting the sign’s current location within the city. The image on the sign comes from Google Earth and includes a maroon border to show where the district has been outlined.

The creation of a recreation district was approved by the Council several months ago in an effort to allow patrons of local restaurants that take alcoholic beverages in to go cups while on foot. Those drinks can be consumed by pedestrians while in the district, so the signs help those patrons ensure they do not exit the district with those drinks. As such, the signs are not very visible while in the driver’s seat.

The signs were made that way because the recreation district does not apply to anyone operating a motor vehicle, golf carts included, Morris said.

Near each sign, pedestrians and motorists will notice a maroon line painted across the road at the intersection where the recreation district ends.

Anyone who lives outside the district’s boundaries will want to ensure they don’t carry their beverage outside the lines.

Additionally, when a patron leaves one establishment with a beverage, they will not be allowed to bring that beverage into another establishment.

Morris urges residents and potential visitors of the recreation district to read the ordinance to ensure they fully understand it.