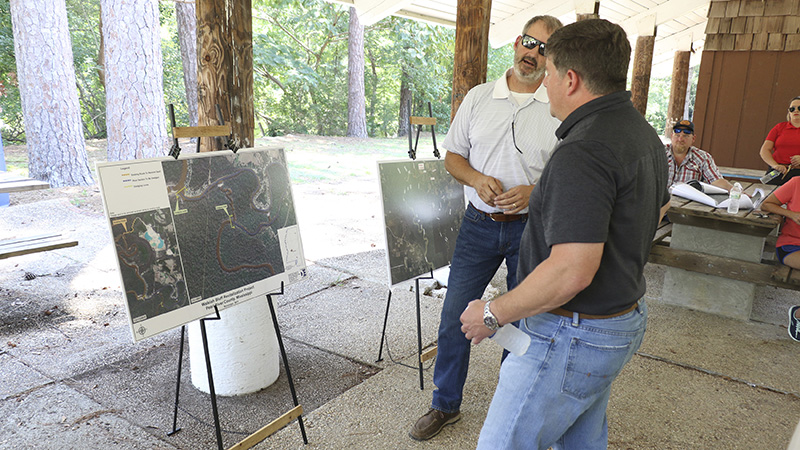 Les Dungan with Dungan Engineering shows Congressman Steven Palazzo graphics outlining his plan to repair damage to the weir along the Pearl River during a gathering of elected officials and project representatives Thursday afternoon. Photo by Jeremy Pittari

Residents living along the east Pearl River in Pearl River County are witnessing an unprecedented drop in flow after the failure of the weir.

County resident Donna Porter said the river continues to fall in front of her home along the east side of the river. The wildlife in the river are suffering as result, in the form of mussels and other water bound life forms being stranded on land and dying.

Thursday afternoon, several elected officials, along with the county engineer, Les Dungan, and members of the Corps of Engineers met at the weir to discuss a plan to repair the structure.

During the gathering, Dungan gave some background on how the weir came to be, and gave his plan to fix the problem. He said that about 25 years ago, when the river began to change direction, the weir was constructed in an attempt to evenly distribute the flow and ensure the east Pearl River maintained a certain water level.

While the weir never reached its goal, its recent failure has now caused even more of a majority of the flow to go to Louisiana. At one point he estimated the split was 85 percent to Louisiana and 15 percent to Pearl River County, but now he said that split might be more like 90/10. County Administrator Adrain Lumpkin estimates the last time maintenance was conducted on the weir was back in 2002.

About $4 million was set aside to conduct repairs to the weir after the dissolution of the Pearl River Basin District. Dungan feels certain the necessary repairs can be conducted to the weir with that funding. At present, the county only needs to secure the proper permit to do the work. Dungan also has plans for a second phase that would involve dredging a portion of the east Pearl River.

Patricia Hemphill, Deputy District Engineer for Programs and Project Management with the U.S. Army Corps of Engineers, suggested everyone involved engage in a collaborative meeting to ensure the process to get the proper permits goes smoothly and quickly.

Dungan said the plan is to put the weir back to its original grade, because that will allow the repairs to be conducted in a more timely manner. Changing any scope of the project will entail a long approval process from several agencies in Mississippi and Louisiana.

Senator Angela Hill and Representative Stacey Wilkes asked Congressman Stephen Palazzo, who attended the gathering, to see what can be done from the federal government to provide more funding and assistance.