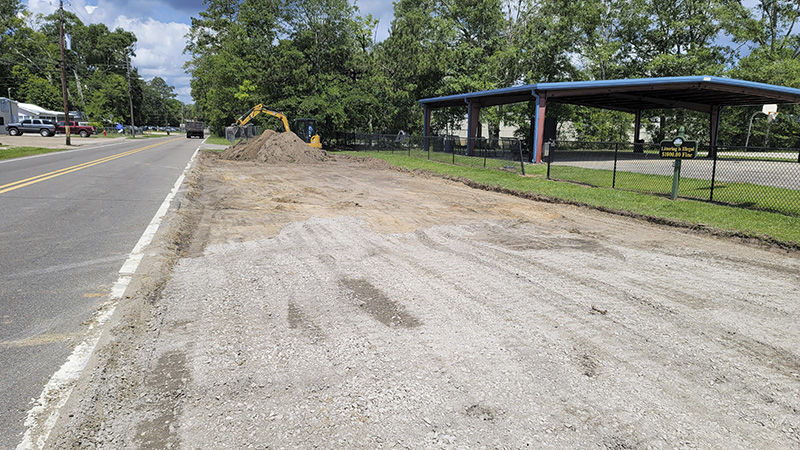 Work is underway to construct parking lots at Leola Jordan and J.P Johnson Parks in the city of Picayune. Photo by Jeremy Pittari

The Pearl River County Board of Supervisors is moving forward with the establishment of an industrial park in north part of the county.

Pearl River County Economic Development District Director Lindsay Ward said the county closed on a 130 acre lot near the Love’s in Poplarville off of Highway 26 about three weeks ago.

The property was purchased using $1.6 million in grant funding from the Gulf Coast Restoration Fund and $400,000 in matching funds from the county.

Ward said the next steps in getting the site up and running include environmental requirements, clearing of the site and then recruiting of businesses and industries will begin.

She said Representative Jansen Owen and Senator Angela Hill were instrumental in helping the county receive the grant.

Paving in the county is continuing to progress. Les Dungan with Dungan Engineering said that overlay work is underway on Timberline Road, Tiara Lago and then Otho Davis will be next. In all, about seven miles of road are planned for paving.

Another road that was part of the project, Albert Prince, came in under budget, meaning more roadway can potentially be paved. However with the rising cost of fuel, a cost adjustment was made by the contractor recently, raising the cost per ton of asphalt to about $120, an $8.70 increase. Dungan said that if the price of fuel drops, that rate will follow.

In other business, Road Department Manager Charlie Scheilder said county crews will be working on the parking lots at Leola Jordan and J.P. Johnson Parks in Picayune this week as part of the memorandum of understanding. The city is paying for the supplies, while the county is providing the man power. Scheilder said the project will be done by this week.

Work to replace the bridge along Shorty Burgess Road is still planned to start soon. Dungan said the concrete pilings that will form the base of the bridge are being constructed. He said he expects to bring the final project before the Board for approval by the next meeting set for June 22.

The Board of Supervisors also discussed the potential need for a traffic light at the intersection of Ivy Street and Highway 11. Board President Sandy Kane Smith said the high grade at that intersection makes it hard for some motorists to see oncoming traffic, especially in the north bound lane due to the dip in the road that goes under the train trestle. No action was taken on that discussion.