Council hears complaints of flooding due to alley project concrete 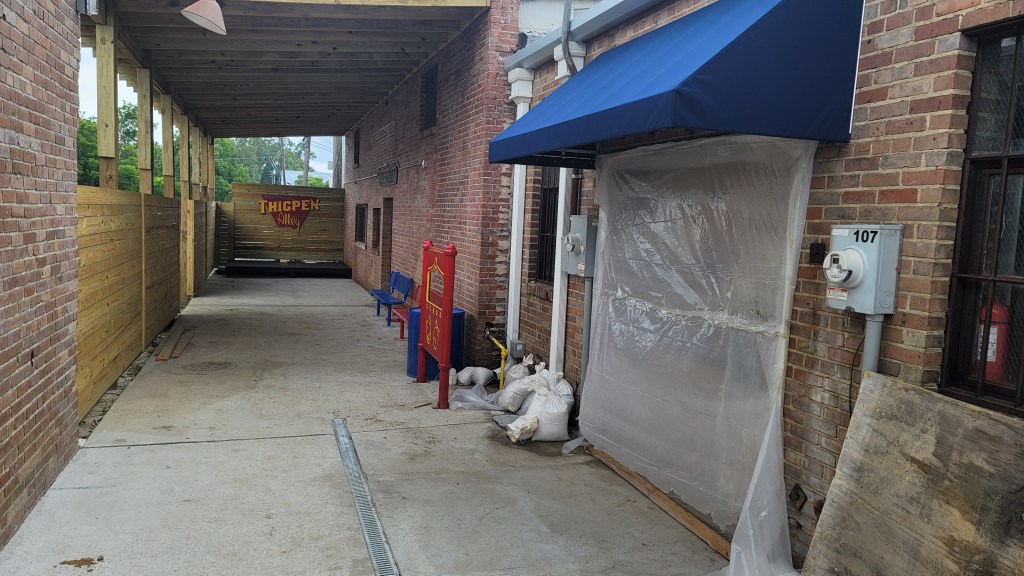 The installation of too much concrete in the second phase of an alley project in Picayune is apparently causing most businesses in that area to flood, causing the operator of this business to tarp it off in an attempt to temporarily alleviate the problem. Photo by Jeremy Pittari

Complaints of flooding into businesses located along the second phase of a joint project to improve an alley were lodged to the Picayune City Council Tuesday night.

Hal and Pam Schrock said that the new concrete installed as part of the alley project has caused their son’s jujitsu business to flood. Compounded with the fact he just purchased the building from Bill Edwards, the flooding caused damage to equipment in the business.

Pam Schrock commended the city’s efforts to beautify the city, but said this project was a failure due to the flooding, which never occurred prior to the concrete being installed. Hal Schrock said the building his 21-year-old stepson now owns and operates has been there for more than 100 years, and it never flooded until now.

The beautification project was conducted in collaboration with the city of Picayune and Picayune Main Street Inc. It involved painting murals in several spots along the alleyway, installing concrete through most of the alleyway and the installation of seating, tables and a stage at the end. It’s now named Thigpen Alley.

Bill Edwards, who owns most of the buildings along that alley, said that nearly every business owner has been impacted by flooding due to the recent installation of the concrete.

The slab that was installed appears to be sloped from the highest point in the middle, towards the doors, creating an issue where the water intrudes under the doors. Compounded with the fact Edwards said the concrete was poured to a height that is three to four inches higher than the door sills, his only method to fix the problem was to install awnings over the doors, of which he said he had to pay half the cost.

Pam Schrock  said she was told by city representatives that an engineer report is needed, but she contends an engineer was not used during the initial work.

City Manager Freddy Drennan declined to say much about the complaint when contacted by the Item on Friday, other than the city is awaiting an engineer’s report on the entire project.

Pam Schrock said she was only able to make the complaints before the Council by adding her name to the citizen’s concerns portion of the meeting. She said prior attempts to be added to he Council’s agenda only resulted in being provided with “bad information.”

No action was taken on the matter during Tuesday’s meeting.

In other business, the Council approved two motions to seek grant funding that will allow the Police Department to purchase new bullet proof vests essentially at no cost to the city.

Those motions were to apply for the 2022 Patrick Leahy Bulletproof Vest Partnership Grant and the 2021 Edward Byrne Memorial (JAG) Local Law Grant. Grant Administrator Lisa Albritton said each grans will reimburse the city 50 percent of the cost to purchase the new vests, essentially covering all costs associated with the purchase.

Due to requests from the public, Mayor Jim Luke asked Parks and Recreation Director Trevor Adam to look into installing baby swings at the recently completed Kid’s Kingdom at Friendship Park.