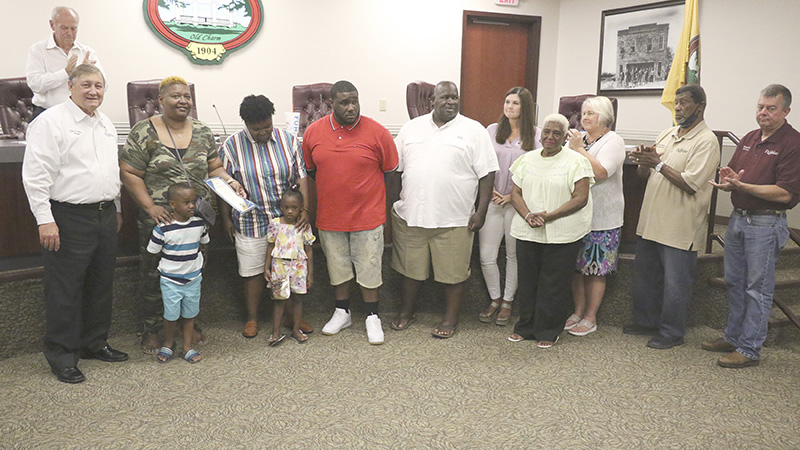 The family of the late Donald Hart were presented with a certificate of appreciation for his time on the Council and his positive influence on the community. Photo by Jeremy Pittari

A former member of Picayune’s City Council was recognized posthumously by the current administration.

Rev. Donald Parker was a member of the City Council for two terms from 2001 to 2009. A graduate of George Washington Carver High School in the class of 1966, he went on to serve in many capacities in his church, last of which was as Pastor of Pleasant Valley Baptist Church from 2013 until his passing in April of 2022.

During Tuesday’s meeting of the Council, Parker’s family was presented with a certificate of appreciation from the mayor and Council. Councilor Larry Breland remarked that Parker has been one his friends since high school, which continued in his role as pastor of the local church.

In other business the Council heard from Police Chief Joe Quave, who said that since the last meeting, officers and investigators worked 1,116 calls, of which 22 resulted in misdemeanor arrests and 10 felony arrests.

He added that the department has also been busy holding the annual police summer camp and holding events where officers play basketball with local children.

During his presentation, Council Jan Stevens asked if his officers could keep an eye on the intersections of Highway 43 North and Highway 11 and Memorial Boulevard and Highway 11 due to an increase in vehicles running red lights.

Within the Fire Department, Fire Chief Pat Weaver said his personnel responded to about 62 calls since the last meeting. Of those calls, 13 were vehicle collisions, three of which involved injuries. Firefighters also worked six fire calls, two smoke cares and eight miscellaneous calls.

As for golf cart inspection stickers, Milar said his office has issued eight stickers since June 3.

Public Works Director Eric Morris said his staff completed the installation of fencing around Kids Kingdom, painted lines and installed signs within the recreation district of the city, and added that the installation of a new roof on the historic side of City Hall is complete.

Cleanup of property along Daniels Street in preparation for a dog park is also done, Morris said.