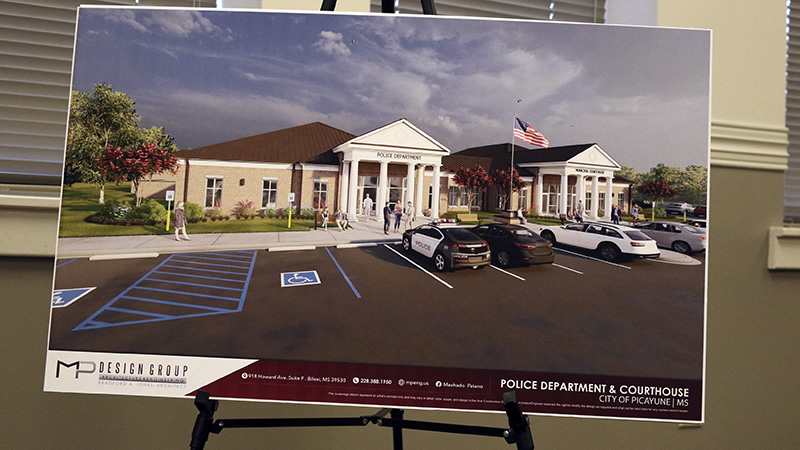 This graphic of the proposed new Picayune Police Department is on display in the Council chamber of Picayune’s City Hall. The city recently bought property along Highland Parkway to construct that new department. Photo by Jeremy Pittari

During the June 21 meeting of the Picayune City Council, elected officials were notified that efforts are underway to revamp the rental process for city parks.

Parks and Recreation Director Trevor Adam said he has been working with Grants and Special Projects Director Lisa Albritton to update the pricing and park policies.

Albritton said she recently took over the park rental responsibilities and as such she reviewed the policies noticed that there were several sections that may be confusing to the general public and even city employees. To get some input from the Council, she presented each member and the mayor with a copy of the ordinance. Some areas she wants to clarify concern whether a non-profit entity renting a park will be required to pay the damage deposit and if the rental fee will be waived for those organizations.

She said the most confusing part of the ordinance concerns renting Crosby Commons.

For the smaller parks in town, she wants to consolidate the rules and regulations to one page and make the application form easier to read. City Manager Freddy Drennan said the goal is to streamline the process to rent a park and thereby make renting them more accessible. He added that he would also like to create an online portal for that process to take place.

In other business at the parks, Adam said he has been in contact with Spectrum to get pricing to bring high speed Internet to Friendship Park. He has already been in talks with Coast Connect for the same reason. Adam said he would like to compare the offerings from both companies. The effort is part of a greater plan to offer streaming services of the baseball and softball tournaments held at the park, allowing relatives of the players who are unable to attend the games physically to get a chance to see their loved one play the games.

With temperatures rising, Adam said city employees have also placed signs at the playgrounds in the city alerting residents that the surfaces may be hot.

Airport Manager Andy Greenwood issued an announcement during the meeting that he will be retiring from city employment before updating the Council about an accident involving a plane that occurred at the facility recently. He said there were no injuries reported and added that the Federal Government is working the incident.