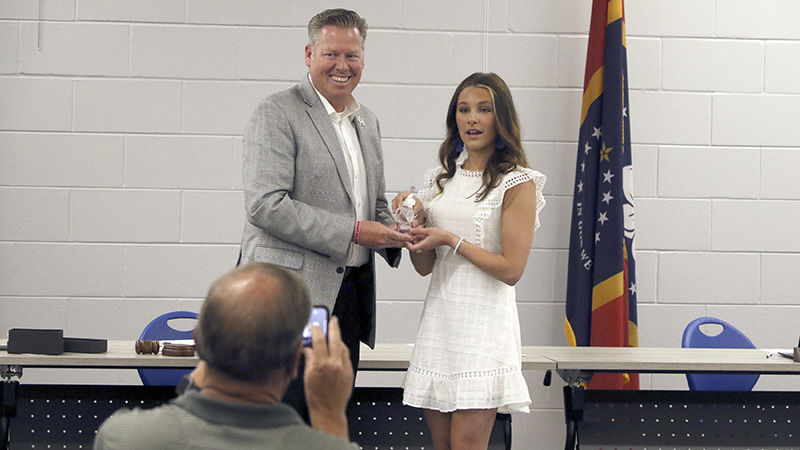 From left, Pearl River County School District Superintendent Alan Lumpkin presents student representative Presley Bower with a token of appreciation for her time representing the student body during School Board of Trustees meetings over the school year. Photo by Jeremy Pittari

Changes in Pearl River County’s population caused the need for the Pearl River County School District to have to shift district lines to ensure each representative on the Board of Trustees represents an equal amount of the residents.

County Administrator Adrain Lumpkin informed the Board of Trustees of that need during the Board’s most recent meeting, saying that some areas of the district gained residents while other areas lost residents. According to the population, Lumpkin said that each district should include about 3,688 people, with a five percent deviation being allowed.

Lumpkin said only minor adjustments would be needed to bring the districts within the five percent threshold. The minor changes in the district lines will not affect the placement of any current Board members.

With two elections coming up in November, Lumpkin said the change needs to be made in the Circuit Clerk’s office soon so updated voting cards can be mailed out to those affected. The Board intends to have that matter handled by next month.

In other business, Business Administrator T.J. Burleson updated the Board about the progress in the construction of the District’s new auditorium at the Carriere campus. He said the classrooms in the facility are nearing completion, with only the door hardware, painting, windows and HVAC left to complete. Once those things are complete, staff and students will start moving their stuff to the classrooms. As for the auditorium, Bureleson said contractors are still waiting on the stage lighting and other things that need to be installed on the ceiling, since that work requires the use of a lift.

Glass is also waiting to be installed on the doors leading to the lobby.

Work is also planned for the gym at the elementary campus in McNeill to bring it up to par for the newly formed varsity volleyball team. That work will include sanding and refinishing of the wood floor.

At the end of the meeting, the Board recognized outgoing Student Representative Presley Bower. Board President Jerry Frazier said he appreciated her commitment to the responsibility of bringing updates to the Board in a perspective only a student could achieve. She was also recognized for being a member of the varsity dance team, cheer squad, achieving high academic honors and for being inducted into the district’s Academic Hall of Fame.