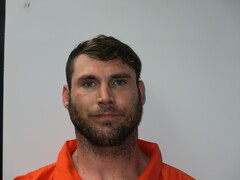 After a Nicholson woman was found dead in her home on Saturday, an investigation into her death later determined she was the victim of murder.

Maj. Marc Ogden with the Pearl River County Sheriff’s Department said the case began on May 7, at about 1:45 p.m. when deputies were called to after someone found 33-year-old Candace Seals Kaleto unresponsive in her home, located at 33 Checker Mitchell Rd.

When the deputies arrived and determined she was deceased, investigators were called out and found enough evidence to request an autopsy and begin an investigation into her boyfriend, identified as 29-year-old Ryan Wesley Chipman, also of 33 Checker Mitchell Rd., who is originally from D’Iberville.

The autopsy determined that Kaleto’s cause of death was due to blunt force trauma to her head and body.

Those results led to the investigators securing a warrant for Chipman, who is currently being held in a Washington Parish jail for DUI. He was arrested in that parish on May 8, at about 2 a.m., according to jail records. On Thursday, after getting the results from the autopsy, the investigators served Chipman with a warrant for second degree murder. He will be extradited to Pearl River County at a later date, Ogden said.