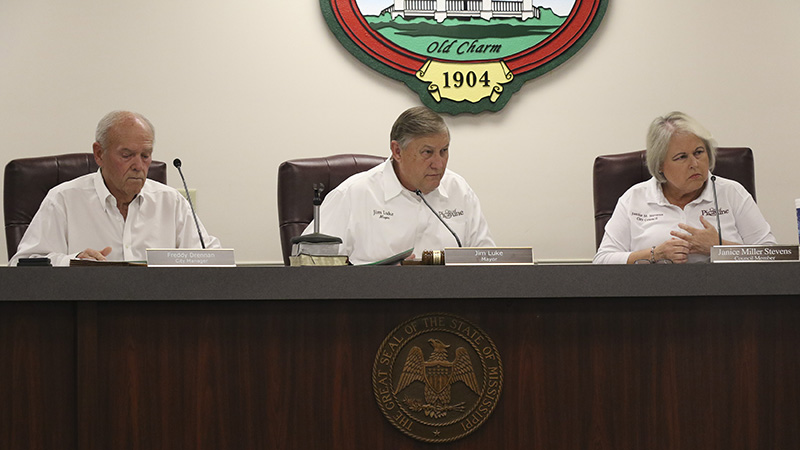 Two seats on the Picayune Planning Commission were filled by the City Council and some requests for subdivisions were discussed.

During that meeting, Councilor Frank Ford made a motion to nominate Michael Blades to fill a position on the Commission vacated by Glen Rayborn. Councilor Anna Turnage seconded that motion, which was approved unanimously.

A second seat representing residents outside of the city limits was nominated by Councilor Lynn Bogan Bumpers, who selected Kim Bowens to fill that seat. Councilor Larry Breland seconded the nomination and it was unanimously approved by the rest of the Council.

The Council also discussed some budget items, such as positions in the city that are funded by more than one department. Connie Everett, a financial consultant from South Mississippi Planning and Development District, said that when one position is funded by more than one department, the department heads are unable to keep their budgets in line. She said that fact, combined with the fact the new position was not budgeted and some raises were provided to city employees that were also not budgeted, made it hard for her to analyze the current budget effectively.

In response, she took what has been spent so far this fiscal year and adjusted the budget to the city’s current spending level.

The Council also discussed a revised preliminary subdivision plan for the Cottage at the Nest subdivision. During previous discussion of that subdivision Councilor Anna Turnage expressed concern that there were too many homes planned for the project, making lot sizes too small, so she asked for the lot sizes to be 50 foot in width.

During Tuesday’s discussion, Code Enforcement Officer Tom Milar said the lots have been reduced to 28 total, with the lot sizes being 45 feet in width. With that change being proposed, Turnage asked if the project would be sent back to the Planning Commission. City Attorney Nathan Farmer said that since there was a change of more than 5 percent, the matter would have to go back to the Planning Commission.

Ford made a motion to approve the subdivision conditional on lot sizes being no less than 45 feet wide, with the homes being 24 feet wide and no more than 28 total homes being constructed.

That motion was approved, with Turnage voting against.

In a separate subdivision matter submitted by Melvin Hicks and Leavern Guy said to entail 15 lots along Neal Road, Ford made a motion to remand the matter back to the Planning Commission due to the possibility of soil contamination from leaking fuel tanks. Ford asked that soil samples be obtained from a government agency such as the Department of Environmental Quality or the Environmental Protection Agency before the project moves forward.

The Council approved that motion, but at the end of the meeting Guy asked to speak on the matter. After Mayor Jim Luke initially declined Guy’s request to speak and asked for a motion to adjourn the meeting, Luke asked legal counsel if Guy could speak, who said it was up to the Council. The Council then approved a motion to allow Guy to speak, who expressed his distaste of the claims being made that the property is potentially contaminated. Guy said those claims are causing the property to lose value. Guy added that he reached out to DEQ about the matter, who informed him the tanks are not on his land.

“We don’t even own that portion of the property,” Guy said.