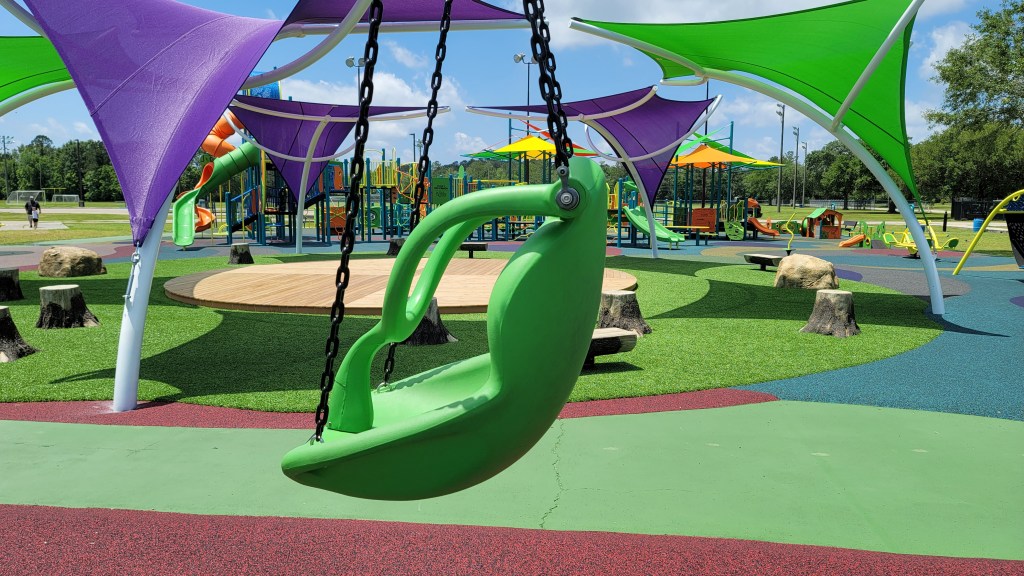 The zip line feature at Kid’s Kingdom suffered some minor damage from inappropriate use recently. The minor damage has since been repaired and city officials are taking steps to ensure the public is educated on the proper use of the equipment. Photo by Jeremy Pittari

What appears to be inadvertent damage to one of the new Kid’s Kingdom features, has led to the city putting an employee on the grounds to help people utilize the equipment properly.

Parks and Recreation Director Trevor Adam said during Tuesday’s Council meeting that the zip line feature at the new Kid’s Kingdom suffered minor damage to the spring return component due to inappropriate use of the equipment. Adam said it appears as though someone was pushing a child on the zip line too far down the line, and caused the spring device that pushes the chair back to the beginning of the line to suffer damage.

The damage has been repaired, and now a city employee has been tasked with monitoring the use of the equipment.

Adam said there was also an instance where one visitor did not remove their pet’s excrement from the playground.

Since the new playground opened at Friendship Park in Picayune, Adam said use of Kid’s Kingdom has been high. On average between 150 to 200 children use the playground daily, at times 100 at one time, even when school is in session.

As summer approaches, Adam expects that number to increase.

To help address the most recent concerns, cameras have been placed at the park, and signs are being made to instruct parents and children about the proper use of the equipment.

In relation to the other planned improvements at the park, such as turf on the baseball and softball fields, Adam said bidding on the turf will take place over the course of the next two weeks.

During the meeting, Councilor Jan Stevens asked if a reservation schedule is being set up so families can reserve some aspects of the park, such as the platform in Kid’s Kingdom.

City Manager Freddy Drennan said that schedule is being formed, and Adam added that the platform will also be used by a local summer reading program to promote literacy.

Installation of the automatic weather observation system at the airport has met with some weather delays. Airport Manager Andy Greenwood said completion of that installation has been pushed back due to problems installing the base that will hold the heavy equipment.

The Council also heard requests to ratify and confirm two previous rate increases set forth by Coastal Environmental Services, and approve another rate increase set to go into effect as of April 1, of this year.

City Clerk Sid Albritton said he could not find where the Council approved the two previous rate increases, one for 2.3 percent in 2020 and another for 1.4 percent in 2021. He asked the Council to approve motions to ratify those increases so they can be reflected in the minutes.

A more recent request for a rate increase by the waste collection company for 9 percent was not approved. Albritton said the contract the city has with the company caps any rate increases at 5 percent, so the Council approved a motion to amend the contract price at that percentage.

Councilor Larry Breland asked if the increases have been charged to city residents. Albritton said that the since the contract is up as of Aug. 31 of this year, he suggested the city absorb the increase and wait to see what bids come in when it’s time to renew the contract or award it to another company.

The most recent increase will add $3,740 per month to the city’s budget for the remainder of the contract’s term.

The Council also heard about a recent water main break that occurred along the East Hobolochitto Creek. Public Works Director Eric Morris said the break was most likely caused by the bank of the creek eroding, caused in part to a change in flow due to a downed tree along the creek. Repairs to the water main were approved by the Council, and Morris said when complete, the repairs will create a loop in the water system from the east and west sides of the city to ensure service is maintained even if another break occurs.