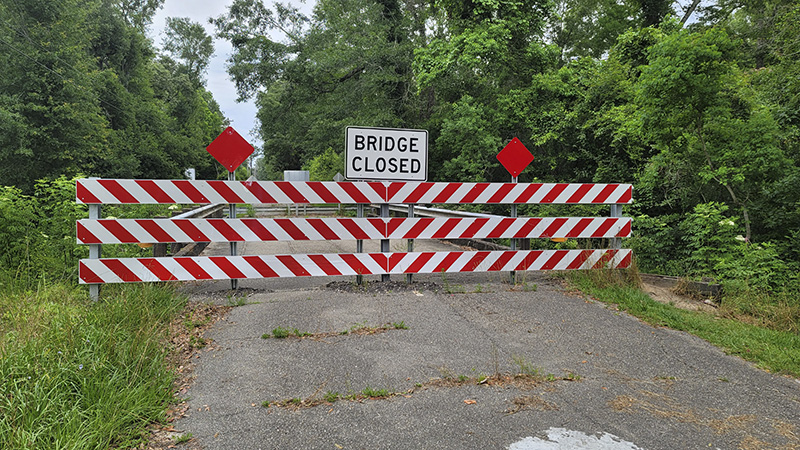 This bridge on Shorty Burgess Road has been closed for more than a year. It was closed because the wood pilings underneath are in a state of disrepair. Photo by Jeremy Pittari

With the bridge being closed for more than a year, replacement of a bridge along Shorty Burgess Road is getting closer to occurring.

According to previous coverage, that bridge, located close to Nicholson Elementary, was closed by the Pearl River County Board of Supervisors back in January of 2021 after an inspection determined the timber pilings under the bridge need replacement.

During the May 18, meeting of the Board, a motion was passed to take a bid from Fred Farvard Inc. to replace the bridge at a cost of $346,925 under advisement. County Administrator Adrain Lumpkin said the Board is looking into ways that state funding might be used to replace the bridge, enabling the county to use other funds for other projects.

Lumpkin said there are 10 or 11 bridges left in the county that are supported by timber pilings.

The Board also awarded grants to two local students worth $500 each. The students are Weston Shaw, who has committed to attend Pearl River Community College, and Sherri Greer, who will be attending the University of Mississippi.

In other business, the Board approved a motion to renovate the old building where the Tax Assessor’s office used to operate. Lumpkin said the work will divide the large open floor plan into separate offices so it can best suit the needs of the Child Protection Services.

Reconstruction of the county’s Mississippi State University Extension office is moving forward. The original building was destroyed by a fire back in April of last year. Lumpkin said the Board has now received building plans to replace that facility, which now be located on Highway 26 near the National Guard Armory.

With the plans in hand, the Board can now begin the process of seeking bids.

The failing nature of the weir along the Pearl River was also discussed. Lumpkin said the Board asked Les Dungan with Dungan Engineering to determine how much it will cost to repair the failing structure, which was initially designed to ensure even flow between the east and west Pearl River. A set of proposed plans to make those repairs have been sent to the Corps of Engineers, but the Board has not heard back yet.

Work is also underway to renovate the historic courthouse in Poplarville. Lumpkin said that work will include updating the windows to more modern versions, converting the old Chancery Court offices to suit the needs of the Circuit Court and then move all Circuit Court offices to the first floor. Currently the Circuit Court occupies offices on the first and second floors. Lumpkin said the offices on the second floor will be converted into rooms where attorneys can meet with clients.

The Board also approved a motion in correlation with a settlement concerning a passenger vehicle colliding with a county-owned street sweeper. Lumpkin said the settlement was for about $4,000 and that no severe injuries were reported.

The Board also approved a motion to declare May 30 as a holiday for all employees, meaning all county offices will be closed that day.