Volunteer firefighter removed from roster after speaking out 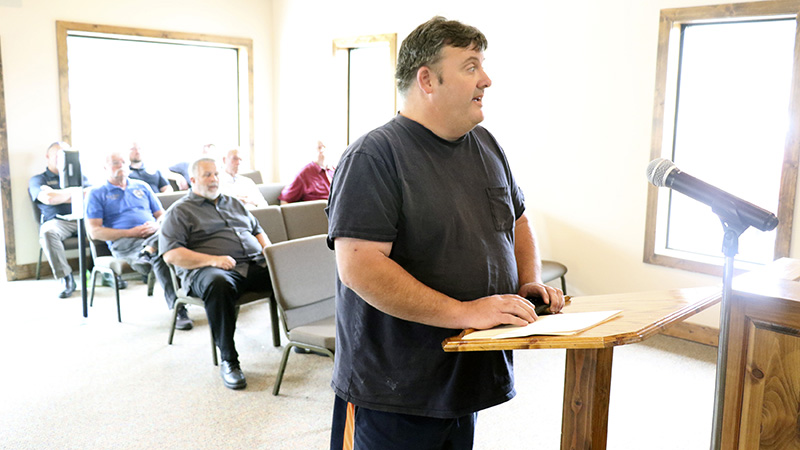 Dallas Hook, a now former member of the Derby Whitesand Volunteer Fire Department, addresses the Board of Supervisors to clear the record concerning things told to them by the fire department’s Board of Directors. Photo by Jeremy Pittari

Dallas Hook, a now former volunteer firefighter with that department, said he was not informed by the department’s Board of Directors that he was taken off the roster, he had to find it out while trying to check on a call for service. When his cellphone app did not provide the location of the emergency, he called the chief, who informed him of his current status with the department.

Hook said he suspects he was removed from the roster because he wanted to clear the record on how the fire truck became in-operational during the most recent Poplarville Christmas Parade. Hook said he was driving the truck at that time, and did not just allow it to run out of gas as the Board of Directors told the Board of Supervisors. Hook said the real reason the truck died was because an air solenoid  became defective, causing the vehicle to think the brakes had failed. Hook said he temporarily fixed the problem that night,  but it was not properly repaired until February. He said he tried to respond to a fire with that same vehicle at some point, but the pumper did not work, prompting those who responded to the fire to put one person in the truck to hold the gas pedal down so the pump would work.

Hook added that the Board of Directors also lied about a truck they said was purchased to be used as parts. Hook said the truck was actually purchased to be an operational vehicle, but when the son of one of the Board of Directors tried to install a new radiator in the truck and botched the job, it has since sat in a state of disrepair. Hook said the fact that the department went through the trouble to have new decals installed on the truck is proof it was not simply purchased for parts.

“We wasted good money on that truck, and now parts are missing,” Hook said.

“How do you lose paperwork that is the bylaws of the department?” Hook asked.

He added that there are other members of the department that are unhappy with the way things are being run, but are afraid to speak out because they too would be removed from the roster.

After hearing Hook out, the Board of Supervisors approved a motion to ask County Fire Marshall Jonathan Head to get a copy of the department’s standard operating procedures.