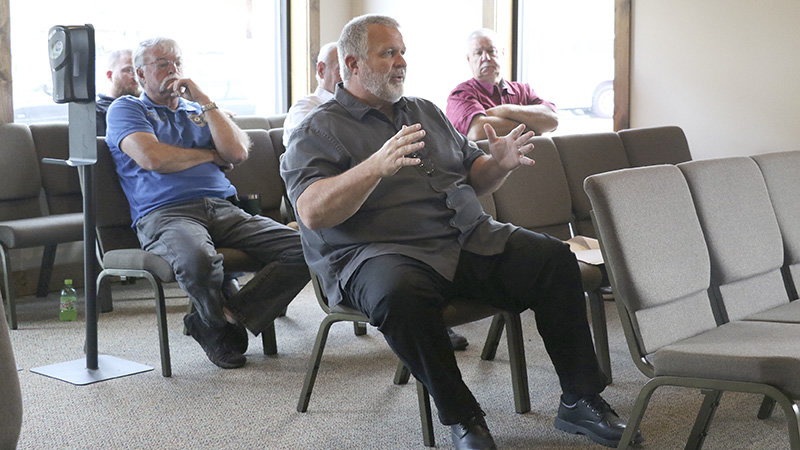 Rev. Allen Hickman addresses the Pearl River County Board of Supervisors about his fears of the county opting in to the state’s medical marijuana program. Photo by Jeremy Pittari

During a special call meeting of the Pearl River County Board of Supervisors Tuesday morning, the Board heard concerns from local law enforcement officers concerning the potential of the Board opting in to the medical marijuana program.

While medical marijuana is now legal under state law, each county and city has the option to opt out of the parts of the program that allow for the establishment of grow sites and dispensaries.

Counties and cities have until May 2 to decide if they want to opt out. If a decision is not filed with the state by that date, the respective area is automatically opted in. Counties and cities can also choose to opt in to one part of the program while opting out of the other.

Initially, the Board was leaning toward only opting in to the growth and manufacture of medical marijuana if the cities would opt in to allowing dispensaries. County Administrator Adrain Lumpkin presented that idea to the City Council during a meeting held by the Council on April 2. With rumors circulating that the city of Poplarville’s Board of Aldermen is leaning toward opting out, and a decision from Picayune’s City Council still unknown, Lumpkin feels the county’s Board of Supervisors may opt in to both aspects.

If a county or city opts out, to either one or both parts, residents in that respective area can file a petition with either 1,500 signatures or 20 percent of the registered electorate, whichever is less, and have the matter put back on a ballot within 60 days of that petition being certified.

Tuesday, several high ranking members of the Pearl River County Sheriff’s Department addressed the Board to have their concerns heard during a workshop to continue discussions as to whether the Board will opt in, or out.

Rob Williams with the Sheriff’s Department urged the Board to review statistics from other states and cities that have not only legalized marijuana for medical use, but recreational use as well, such as Colorado, where DUI deaths are reported to have increased significantly since the substance was legalized.

“It’s a sorry law that shouldn’t have been passed,” Hickman said.

Sheriff David Allison said he has received phone calls from concerned citizens who told him they did not know what they were voting for, and suggested the county put the matter back up for a vote.

Lumpkin said that when the vote was held back in 2020, 14,000 Pearl River County residents voted for either Initiative 65 or Initiative 65A, while 8,000 voted against. For comparison, Lumpkin said he would be surprised to see 14,000 people in total vote when the next election for county seats is held.

Lumpkin said it would cost $30,000 to hold another election, and feels it would be a waste of money since the outcome would be the same. Allison offered to pay for that election using drug forfeiture funds.

District IV Supervisors Jason Spence and District II Supervisor Malcolm Perry said they received calls from residents who believe it’s wrong to take the public’s vote away from them by considering opting out, even though those individuals have no plans to use medical marijuana. District III Supervisor Hudson Holliday said he received a letter from a constituent who said something similar.

“It’s already been on a ballot. Who are we to say that people didn’t know what they were voting for? I don’t understand why they need to vote on it again when they voted on it,” Spence said.

Another aspect of the program brought up by the Board was that even if the county opts out, residents can still travel to neighboring cities and counties that opted in and procure medical marijuana and bring it back into this county.

The law enforcement officers also advised the Board to use what is happening in Oklahoma as a word of caution. Marc Ogden with the Sheriff’s Department said in every state that has legalized marijuana for medical or recreational use, crime rates increased, and homelessness rates increased. He is also concerned about the type of people that will come to this area who will work the grow houses and dispensaries. Security of those faculties was also a concern lodged by Ogden. He said he expects the case load of burglaries and robberies to increase as people try to either steal the substance from inside a grow house, or rob card-carrying residents as they leave a dispensary.

The Board assured Ogden that the need for strict security measures will be included in the county’s ordinance.

Shane Edgar with the Sheriff’s Department expressed concern about his children seeing dispensaries with flashy logos and possibly cartoon characters on the front, making it harder to raise his children.

A sample of the regulations being formed by the Mississippi Department of Health specifically restrict the types of signage a dispensary can use, including an image of a marijuana leaf, any anything that appeals to children and also bans advertising medical marijuana in any form of media, such as a newspaper, television station or billboard, Lumpkin said.

Edgar also expects the number of DUI arrests to increase as people decide to smoke while driving or drive shortly after smoking. Ogden said the department currently has one DUI officer on staff. Allison said he expects he will need a larger budget to hire additional officers if the county opts in due to the predicted increase in crime, to the tune of $500,000 to hire about six more officers.

Holliday said that opting out would create a situation similar to the current dry status of the county, where residents drive across county and state lines to purchase liquor, and bring it home. He added that there were scary stories spread around Poplarville when the city legalized the sale of beer in the municipality back in 2014, but none of those predictions came to light.

“I don’t see it being the booger bear everyone thinks it will be,” Holliday said.

He then followed up with a comment that he wishes medical marijuana was not legal in Mississippi, and everyone could just “get high on the American dream.”

The Board informed the law enforcement officers in attendance that the intent is to create an advisory committee for permitting, which will include law enforcement representatives to look for potential problems.

Picayune City Manager Freddy Drennan, who was in attendance for Tuesdsay’s meeting, said he is unhappy that he spent 41 years in law enforcement fighting drugs, but now has to deal with this state’s law on medical marijuana. He asked the Board to consider adding a requirement that any dispensary and grow house utilize local law enforcement as security 24 hours a day, all year long. He also suggested the permitting process require a state permit to apply for a county permit, and regular checks should be performed at each operation to ensure the permits are up to date.

Lumpkin said the county’s draft ordinance requires a state permit to apply for a county permit, and he would like to charge the same fee the state will charge.

Ogden asked that if the Board moves forward with opting in, to “find a way to tax the hell out of them.”
Lumpkin and Allison said they expect that people with deep pockets will be backing medical marijuana grow sites and dispensaries, and it’s expected that those individuals will not be from this state, or country.