Luke covers projects, plans at Chamber of Commerce’s Coffee with the Mayor 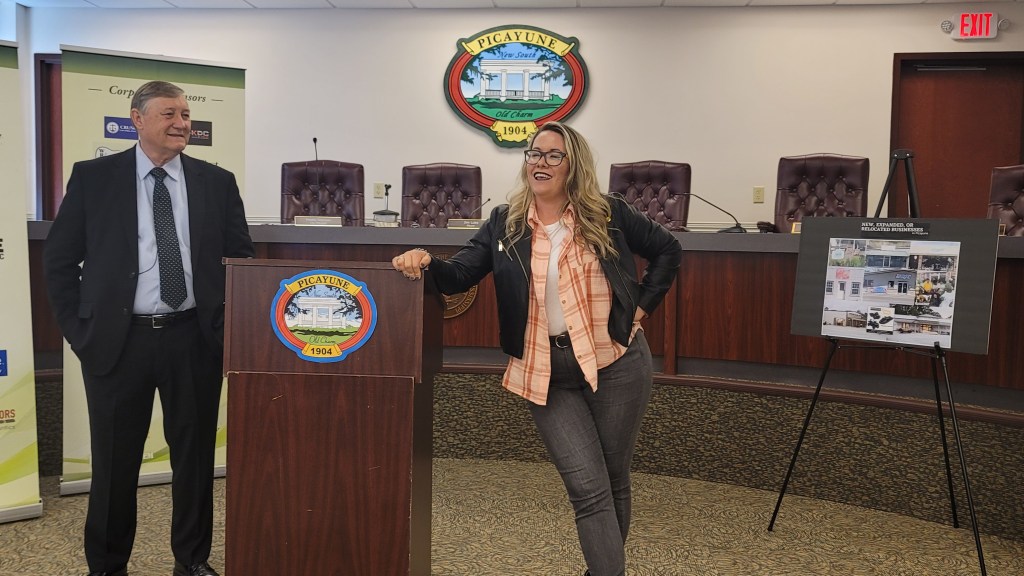 The Greater Picayune Area Chamber of Commerce’s Coffee with the Mayor featured a number of updates from Mayor Jim Luke.

During the event, Luke touched on the various projects underway in the city and shared some of the things he and the City Council want to accomplish.

With Friendship Park’s Kid’s Kingdom now open to the public after about four months of construction, the park will now see other improvements, such as bathrooms, concession stand and new tennis courts. One of the new bathrooms will be located near the splash pad, while the second will be further back in the park. Other improvements will include eight turf baseball and softball fields, more parking and improved lighting at Friendship Park.

New playground equipment has also been installed at Leola Jordan Park and J.P. Johnson Park and the city has plans to create two dog parks.

Luke said the first dog park is planned for construction near Mildred Mitchell Park, located on Sycamore Road. That dog park will be for medium to large sized dogs. A dog park for small dogs is also planned for what Luke described as a location along Goodyear Boulevard, but he did not specify.

There is also an effort to create a Youth Council to give the young people of Picayune a voice. Luke said members of that council will be selected by members of the City Council and will be comprised of students in 10th to 12th grades. The plan is to have the Youth Council in place before the start of the next school year in August.

After giving all officers in the Picayune Police Department raises, Luke said turnover in the department has declined significantly. He said since the raises were issued, not one officer has resigned, before the raises officers the department lost an officer a week.

Part of the millage increase to pay for the officer’s raises also includes money to build a new police station. Luke said papers were signed about two weeks ago on a lot located along Highland Parkway. That location will put the department a close distance from Interstate 59 and in a location where trains can’t block traffic. He said a substation will be established on the south end of town near the training facility located next to current station.

Luke also gave an update on economic development efforts, including the establishment of a new motorcycle shop on Memorial Boulevard, a new ice cream business on Palestine Road and two new boiled seafood businesses in town to name a few.

A new business is also in the process of locating in the city’s Industrial Park, called The Linen Company. Luke said the plan is for the company to provide up to 85 good paying jobs and will make a $6 to $10 million investment in the construction of the facility.

Luke also mentioned “talk” of an Arby’s locating in Picayune along Warren Street.

The city is also still working to adopt the land on exits 4 and 6 along Interstate 59 from the Mississippi Department of Transportation. Luke said the city would like to adopt those locations after MDOT brings them to “pristine condition.” That will allow the city to cut the grass at those locations more frequently than MDOT and for other improvements. That process will also include new signage for the city with the city’s motto, “Visit here, shop here, retire here,” Luke said.

Work is also underway to restore the historic side of City Hall, in part through funding Senator Angela Hill helped secure for the city, Luke said.

When asked if there are any plans for the old Ryan’s building, Ward stepped in to say that the city is limited on what it can do with private property. She said there have been some commercial entities who expressed interest in buying that property, but the current owners prefer to lease it out.