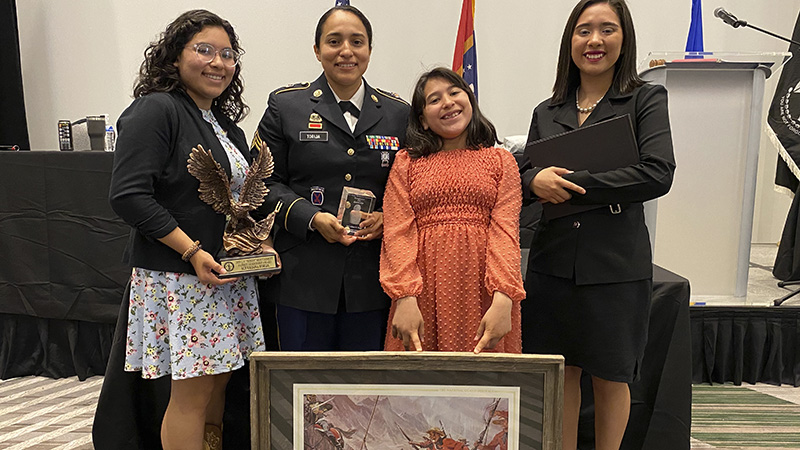 A deputy with the Pearl River County Sheriff’s Department was recently awarded a prestigious honor from the Army National Guard for her exceptional leadership as a member of the military.

Sgt. Lilliana Torija with the 1108th TASMG was awarded the G.V. “Sonny” Montgomery Award on March 26, which highlights soldiers and airmen and women who display exemplary leadership within the Mississippi Army and Air National Guard.

In addition to her three years of service in the Army National Guard, Torija works as a deputy with the Pearl River County Sheriff’s Department, a position she has held for the past two years. She also served for nearly four years as an active duty member of the Bravo Company 277 Aviation Support Battalion.

To be considered for the award she had to submit a written assessment of her leadership abilities. In that submission, she described her time serving in active duty overseas during her tour with the Bravo Company 277 Avaiation Support Battalion, during the Enduring Freedom in Afghanistan in 2010. While also performing official duties for the military, she also devoted volunteer time to help the women and children there learn to read and write in English, and is currently learning a new language, Ivrit, to add to the two she already knows fluently, English and Spanish.

She said that after she masters Ivrit, a form of Hebrew, she plans to start learning a new language.

While she said she will not be able to realize her dream of being a pilot with the military due to her age, she has other aspirations of trying out for the Special Forces and Officer Candidate School.

Locally, she volunteers her Wednesday nights to help the youth who attend Resurrection Life Church.

When she’s not at work or with the National Guard, she also takes Muay Thai classes at the Golden Dragon in Picayune.

Torija is also a mother of daughters and has aspirations of becoming an investigator within the military.

She would also like to see access to quality mental health care expanded locally so those who need help can get it.