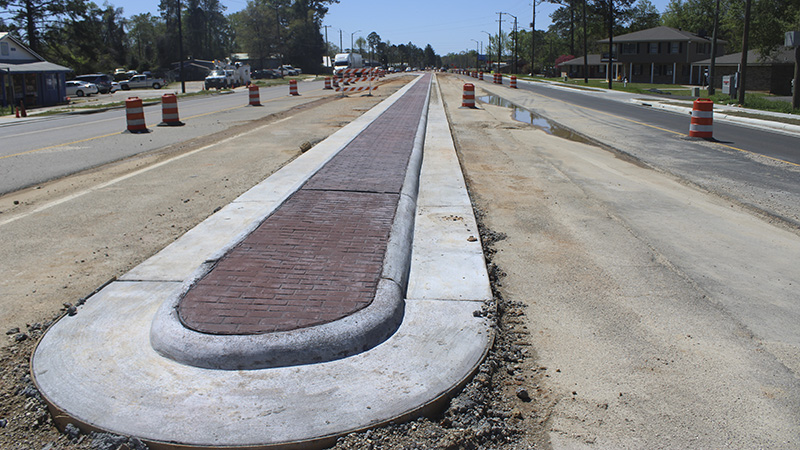 This new median installed as part of the Highway 11 widening project now restricts access to a number of businesses, forcing motorists to have to travel about a quarter of a mile at times to make a U-turn. File photo by David Thornton Jr.

The widening of Highway 11 from the entrance of Hide-A-Way Lake to Cayten Street has caused some Picayune business owners to submit complaints to their City Councilor.

During the most recent City Council meeting, Councilor Anna Turnage said she has received calls recently that businesses are suffering from the recent changes made as part of the ongoing project to widen that stretch of the highway to four lanes.

Part of that work included a long concrete median that cut out most areas where motorists used to have easy access to any business along the highway. From the intersection of Highway 43 to Hide-A-Way Lake, there are now only two places where motorists can make a U-turn to go back the way they came to access a business. For instance, people living north of town used to be able easily pull into Mickey’s #2 to get gas, now they have to travel several more blocks before they can perform a U-turn to get access to the business, or go elsewhere. Turnage said she has received calls from representatives of five or six businesses along the project’s path who said they may have to close.

Engineers with MDOT informed representatives with the city that this new traffic control feature was utilized to reduce traffic collisions. A similar change was made in the cities of Gulfport and Laurel to address traffic congestion and collisions. After the change those problems were said to have been reduced. Additionally, while some businesses may see some impact from the current construction, Turnage was assured that when the project is complete, currently anticipated to be sometime in May or June, the businesses should not have to close based on the fact that businesses in Gulfport located near a similar traffic change are still in operation now that the project is complete.

Mayor Jim Luke asked Public Works Director Eric Morris to contact a representative with MDOT to see if anything can be done about the limited access, and asked Police Chief Joe Quave to pull information about any collisions occurring along the project’s path due to U-turns.