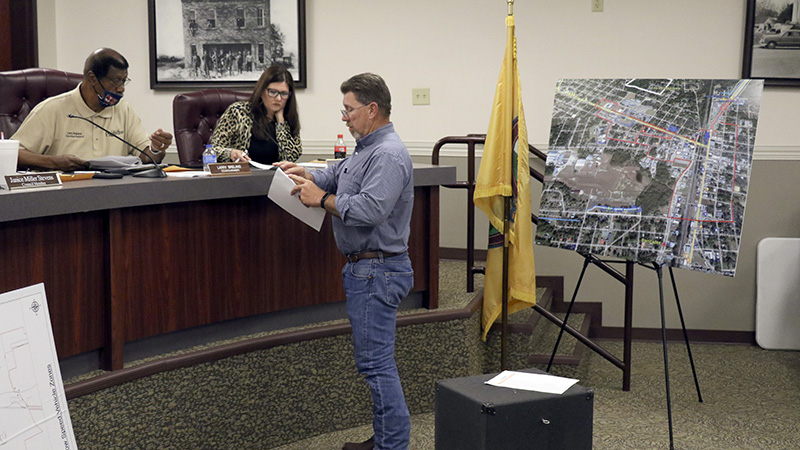 From left Councilors Larry Breland and Anna Turnage are handed additional information by Public Works Director Eric Morris during a special call meeting held Thursday concerning a proposed recreational district in the city and a proposed golf cart ordinance. At far right is a map of the recreation district. Photo by Jeremy Pittari

Proposals for golf carts on city streets and to go cups of alcoholic drinks within a certain area of Picayune were pitched to the City Council during a special call meeting held Thursday.

Golf cart use in the city of Picayune will be limited to areas within the city that have low speed limits.

According to presentations made to the Council by Public Works Director Eric Morris and Picayune Main Street Inc. Director Reba Beebe along with the registration requirements covered by Assistant Police Chief James Bolton, several safety precautions are being taken by the city.

Morris said the plan is to install signs at 86 locations throughout the city that alert motorists of their need to share the road with golf carts on approved streets. Placement of those signs will focus on areas of the city where golf cart use will be allowed, specifically streets with a speed limit of 30 miles per hour or less. The golf carts are required to operate at a speed of no more than 25 miles per hour.

The total cost for the signs, posts and fasteners is estimated to be $5,012.

City Manager Freddy Drennan added that anyone who wants to use their golf cart on public roads would have to have that vehicle inspected by a member of the Picayune Police Department. Assistant Chief James Bolton said the golf carts will be required to have headlights, brake lights, a windshield, insurance and turn signals. Some sort of reflective material is also being considered.

While the carts will not be allowed to travel along a state highway, they can cross a highway at designated crossings such as those with traffic lights.

That will mean some residents in the north end of the city will be unable to drive their golf cart to the downtown area of the city, since the only way to get there is via Highway 11 or Interstate 59, roads where the use of a golf cart is not permitted.

Some aspects of the new ordinance have not been ironed out yet, such as times of day when the use of golf carts will be allowed and actual crossing points along Highway 11.

Carts can be parked in normal parking spots, Bolton said.

Morris said the signs will be placed in key areas of the city, such as the entrances of subdivisions and entrances to main avenues.

In relation to the proposed recreation district in downtown Picayune, customers who patron a restaurant in those areas will have the option to take a to go cup of an alcoholic drink. This ordinance will not permit residents to bring an alcoholic drink from home or a stores for consumption on city sidewalks, Drennan said. Cups provided to customers by a business will need to be unique to each business, and that beverage will not be allowed in another business.

Beebe said this ordinance will not relate to Street Festivals since alcoholic beverages are not allowed during that bi-annual event.

The cost to install the signs and paint the stripes is estimated to be $2,704 and will be installed with in-house labor, Morris said.

During Tuesday’s meeting of the City Council, unanimous motions were made to approve both ordinances.