Elected officials, community members push for county to opt out 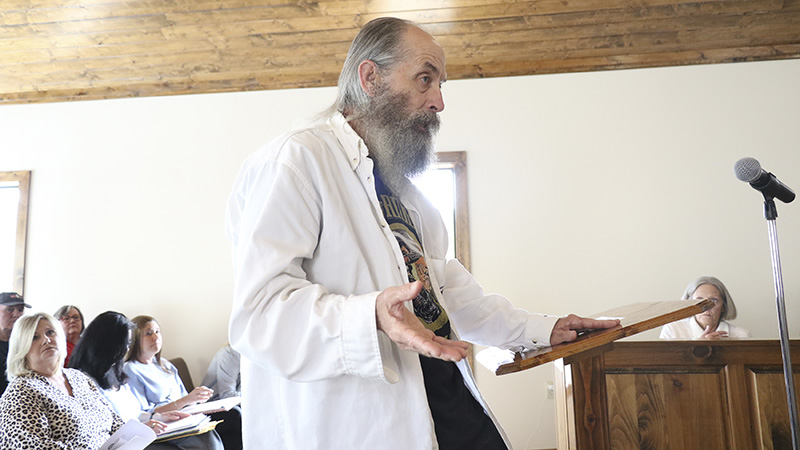 Tom Lehr was the only attendee of Wednesday’s meeting of the Pearl River County Board of Supervisors to speak in support the Board opting in to the state’s medical marijuana program. Opting in will mean companies can set up grow sites and/or dispensaries in this county. Even if the Board opts out, it will still be legal for residents to receive a prescription for medical marijuana, but they will have to drive further to have it filled. Photo by Jeremy Pittari

Wednesday, several members of the public, including some state elected officials and law enforcement representatives, attended a meeting of the Pearl River County Board of Supervisors to express their opposition of the county leaning toward opting in to the medical marijuana program. By the end of the conversation, the Board approved a motion to hold a public hearing about the matter on May 2, at 6 p.m. in the Board Room in Poplarville.

Only one person spoke in favor of the Board opting in to the program, Tom Lehr, while every other person who spoke asked the Board to opt out.

Hill said she tried to educate the public about how the program would work back when it was up for a vote in 2020.

She said that every person she has talked to tells her that they did not understand how the program would work when it was up for a vote. She also feels that the substance should be given to patients through a pharmacy manned by a licensed pharmacist rather than an 18-year-old with minimal training through a dispensary. Additionally, Hill said the law allows for those with a prior convictions to be able to get a license to work in a dispensary or grow site, which concerns her.

She said while the Legislature was writing up a bill to make medical marijuana legal, she too wrote her own version of a bill/addendum that did not allow distribution of “combustible” marijuana that can be smoked.

Another concern she shared was that she feels children should not be provided combustible forms of the substance, but should be provided other forms.

It’s currently unclear if children who are prescribed medical marijuana will receive it in a combustible form, such as a cigarette.

District II Supervisor Malcolm Perry asked Hill if the county opts out, if residents can still travel to a neighboring county to fill their prescription and bring it back home. Hill said yes, the law allows for that, whether the city or county has opted in or out. But she said her concern is allowing the production and sale of the substance locally.

Ultimately, Hill asked the Board to opt out for now, and once the rules and regulations are issued by the Mississippi State Department of Health and Mississippi Department of Revenue to make a decision whether to opt in at that point.

Courtney Temple, a county resident, also addressed the Board to ask that they make the decision to opt out. She said that the ballot that had Initiative 65 and 65 A on it was so confusing she had to read it several times. She added that the way the ballot read was also confusing to her grandmother.

Perry and Holliday said that they have received phone calls from constituents who said that even though they voted against medical marijuana, they disagree with the Board considering reversing the decision made by the majority vote. According to previous coverage, more than 14,000 registered voters in this county voted for medical marijuana, while more than 8,000 voted against it.

If the Board opts out, the voters still have the option to file a petition to put the matter back on a ballot. If such a petition is filed, an election would have to be held within 60 days of the signatures being verified as being from registered voters, Lumpkin said.

Tom Lehr was the only person to stand up during Wednesday’s meeting to support the county opting in. He said that he applauds the Board for considering opting in since the majority voted for it. He added that he deals with back pain, and when a doctor suggested oxycontin, he did some research that deterred him from accepting the medication. He said that if he had the option of medical marijuana, he would choose that over oxycontin.

After the county announced the public hearing on its social media account, a majority of the comments so far have been from people asking the Board to opt in, Lumpkin said.

The Board will hold that public hearing on May 2, at 6 p.m. at the Board Room, located at 109 West Pearl St., Poplarville. Lumpkin said that if the turnout is too large for the Board Room, the meeting will be moved across the street to a courtroom in the County Courthouse.