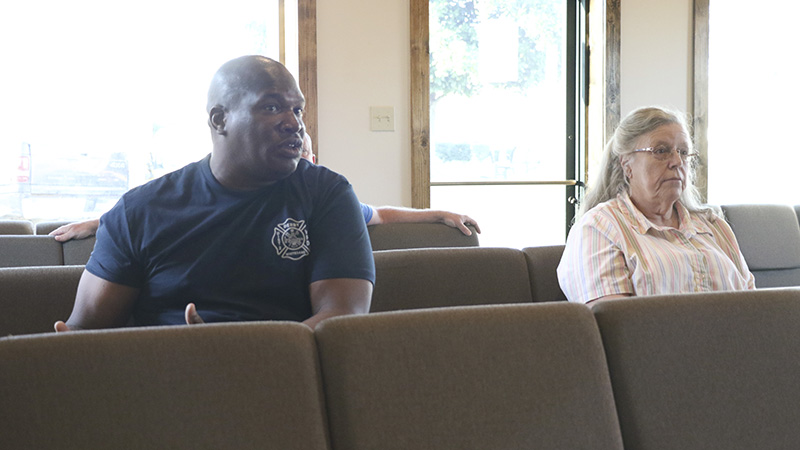 Enoch Raine, a member of the Board of Directors for the Derby Whitesand Volunteer Fire Department, speaks to the Pearl River County Board of Supervisors to address complaints about his department’s firefighters. Photo by Jeremy Pittari

Complaints that volunteer firefighters with a local department refuse to respond to grass fires and the possibility of that district losing its fire insurance premium discounts were addressed by the Pearl River County Board of Supervisors during a special call meeting held Monday evening.

In that meeting, three members of the Board of Directors for the Derby Whitesand Volunteer Fire Department met with the Pearl River County Board of Supervisors to address those concerns.

Board of Supervisors President Sandy Kane Smith and District III Supervisor Hudson Holliday began the discussion by asking why they received a letter from the fire insurance rating bureau warning them that policies within that fire district will rise due to a lack of fire call response from that department. Other complaints included firefighters with the department allegedly refusing to respond to grass fires and there being reports of equipment within the department being inoperable. One such report stated one of the department’s vehicles broke down during the Poplarville Christmas Parade.

Three members of the Derby Whitesand Volunteer Fire Department Board were in attendance, of which Enoch Raine did most of the speaking for his department. The department’s chief was not in attendance due to a prior engagement.

District III Supervisor Hudson Holliday said he has received complaints that firefighters with other departments are tired of responding to calls within the Derby Whitesand district due to a lack of response within that department.

When the Board of Supervisors asked about the accusations, Raine said it is true that there are times when firefighters within the Derby Whitesand VFD can’t respond to calls because they are working their full time jobs. As for the accusation that they refuse to respond to grass fires, Raine said the firefighters do respond to those calls when they can, but at times the fires are so deep in the woods he feels the Forestry Commission should respond to them. Additionally, Raine feels the punishment for those who set grass fires is not being enforced.

In relation to the fire truck breaking down during the parade, Raine said the vehicle did not break down, the driver failed to fill the gas tank.

Additionally since this new Board took over at Derby Whitesand, Raine said the fire rating for the department went from a 10 to an 8, which led to a savings in fire insurance premiums to home and property owners in that district.

Pearl River County Emergency Operations Director Danny Manley said the rating bureau bases those ratings on how many firefighters from a respective department responds to structure fires. Recently a structure fire in the Derby Whitesand District was worked by members of other departments.

As for the issues with the rating bureau, Raine said the Board has plans to meet with a representative to ensure that agency’s concerns are addressed so the department can maintain its current rating.

When asked why a fire truck is parked outside a station apparently in a state of disrepair, Raine said that the truck, parked outside Station 1, is a parts truck used to keep a similar truck operational.

The Board also addressed a plan by the department’s Board to build a one bay satellite station on a 50 foot by 50 foot piece of property.  County Administrator Adrain Lumpkin suggested that even though the proposed property is being donated, Derby’s Board needs to reconsider building the station there and instead find a larger lot that would allow for expansion when that time comes.