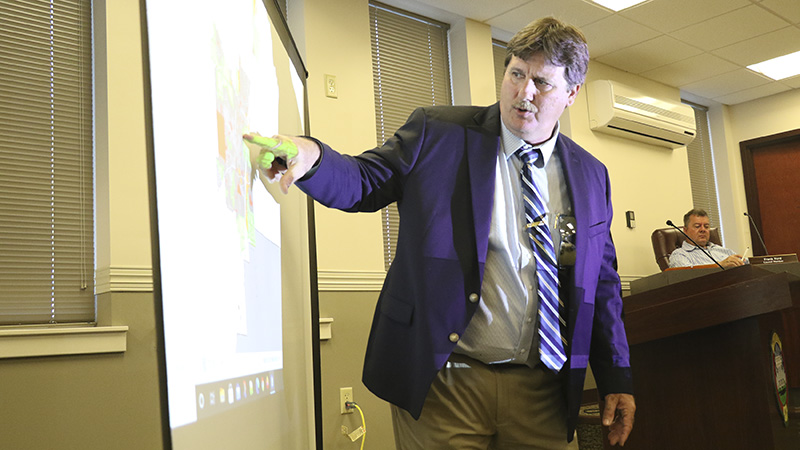 County Administrator Adrain Lumpkin shows members of Picayune’s City Council the areas where he sees a medical marijuana dispensary could potentially be placed in the city. His proposal was for the city to only allow dispensaries, while grow sites would only be allowed in the county. Photo by Jeremy Pittari

A modified opt-in plan of action concerning medical marijuana was discussed this week by the Pearl River County Board of Supervisors and the Picayune City Council.

During Monday’s special call meeting of the Board, County Administrator Adrain Lumpkin proposed the option of the county only opting in to allow the growing of medical marijuana while working with representatives of the two cities for them to allow dispensaries, but opt out of growing. The county would opt out of allowing dispensaries outside of city limits under the proposed plan.

Lumpkin then presented a detailed plan of that option to the City Council during a special call meeting held Thursday evening.

In that plan, Lumpkin showed the available lots within the city limits were medical marijuana could be grown and the available areas where a distribution center could be established within those same limits.

Going off of tax records only, a map was formed to show the locations where both of those operations would not be allowed to due to the current presence of a school, church or day care. State law prohibits a grow site and dispensary from being located within 1,000 feet from any of those locations. Additionally, a dispensary can not be located on the same site as a grow site, and dispensaries have to be 1,500 feet away from each other. Lumpkin added that any company wanting to locate either operation any closer to a school, church or day care would have to ask for a waiver from those entities. The waiver would reduce the distance from a school, day care or church would then be reduced to 500 feet. To his knowledge, even if a waiver was secured by an investor, the Council would not be obligated to honor it.

Lumpkin said he is making the proposal that the county allow grow sites while the cities allow dispensaries, but because he knows if the county and city opt out of both, the residents who voted for the initial bill will form a petition and get the required number of votes to pass it, effectively taking the regulation away from the cities and county. Holding that election would also incur an additional expense to both parties.

When Councilor Anna Turnage asked what kind of investor would be backing either of those endeavors, Lumpkin and City Manager Freddy Drennan said it would most likely be someone with a lot of money from out of state, or even out of the country.

During Lumpkin’s presentation, he said there are effectively up to 15 spots in the city that would meet the known requirements set forth by the Legislature where a dispensary could be established. He said three of those spots are along Highway 11 near Hide-A-Way Lake, two more are on the north side of town along Highway 11, two are at the Carriere exit of I-59, three are near exit 6, four sites apply near Walmart in town and there are some additional spots along Memorial Boulevard and exit 1 in Nicholson. He added that the map shown during the Council meeting is not 100 percent accurate since some churches or day cares may be renting the property in which they operate.

His suggestion for cities to opt in to dispensaries would also mean the city could collect tax diversions from the sale of medical marijuana. Counties currently do not receive sales tax diversions.

With so much agricultural land in the county, he said there are several locations for investors to establish grow sites outside city limits that could be away from the public eye.

Lumpkin added that the law states any grow site has to be within a structure and can not be outdoors. His thinking is that a greenhouse would not apply since those structures are not rated for the 120 mile per hour winds building codes require n this area.

Drennan said that his experience in law enforcement makes him reticent about the entire establishment of medical marijuana within Pearl River County, but the state has legalized the use of it and opting out will not keep people from acquiring cards from the Mississippi Department of Health and getting their prescription filled in other areas to bring back to Picayune.

Sheriff David Allison called for both governing bodies to opt out, saying the county already leads the state in overdose deaths and he fears allowing medical marijuana grow sites and dispensaries to establish here will only exacerbate that problem.

All local governments within the state have until May 2 to decide if they want to opt out, otherwise they are automatically opted in.

Since both discussions were not up for a vote, a decision was not made on the matter by either governing body.

Lumpkin and Drennan said they expect the Board and Council to continue discussions as more meetings are held before the deadline.