Council asked to opt out of medical marijuana manufacture, distribution 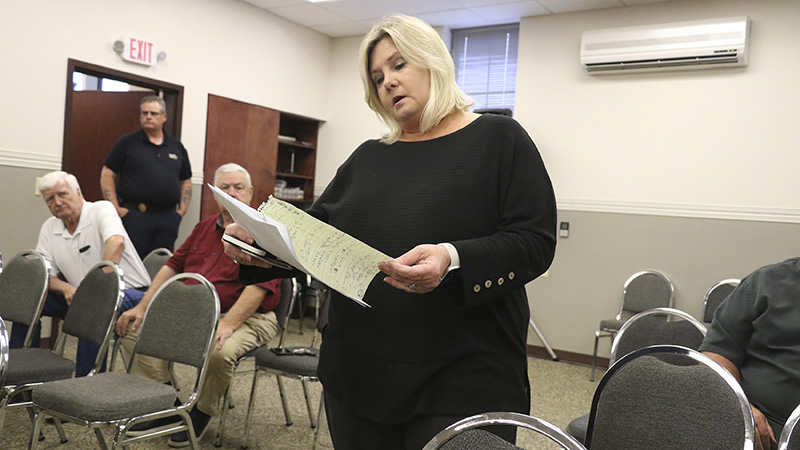 State Representative Stacey Wilkes provides some information to the Picayune City Council based on a conversation she had with the state’s District Health Officer, Dr. Thomas Dobbs, about medical marijuana. Photo by Jeremy Pittari

Discussion of whether to opt in or out of medical marijuana by Picayune’s City Council Tuesday night involved concerns being lodged by local pastors and a state representative.

After City Manager Freddy Drennan updated the Council on some of the latest news that the Board of Supervisors is considering opting in, the fact that the city of Tupelo is also opting in, and that some draft regulations have been released by the Mississippi State Department of Health, State Representative Stacey Wilkes gave an update.

Wilkes said she spoke with State District Health Officer Dr., Thomas Dobbs, who informed her that the regulations drafted by his agency so far focus on banning the advertisement of medical marijuana via any media source and set forth requirements for workers, however those and other regulations are still being set in stone.

She urged the Council to opt out of the program to wait and see what happens in other areas of the state.

“I can promise you it will be a train wreck,” Wilkes said.

Her request included a comment that she wants Picayune to remain a family-oriented place without medical marijuana.

Her other concerns were that children who receive medical marijuana will be using the drug in school.

“I hope I’m wrong about this and it won’t be a train wreck and it will work out,” Wilkes said.

She said Madison County and the city of Pass Christian have both opted out.

As stated in previous coverage, if a city or county opts out of the program, which will mean that city or county will not allow the growth, manufacture and distribution of medical marijuana but it will still be legal to possess it with a state issued card, voters can file a petition of 1,500 names of registered voters or 20 percent of the electorate to have the matter put on a ballot.

Wilkes said that the good part of the law is that it is not in the state’s constitution, so as the Legislature moves forward changes can be made.

Councilor Anna Turnage, who is also a teacher in the Picayune School District, asked about a rumor that high schoolers who are prescribed medical marijuana will be given a designated smoking area on campus. Wilkes said to her knowledge it will be up to the school districts to allow the use of medical marijuana, and she is unsure of what form of the substance will be allowed for use by students who have a card while on campus.

Drennnan suggested the Council start thinking about what ordinances they want to put in place now, even if the city decided to initially opt out. That way, should a referendum come before the Council, the city will be prepared.

Dr. Tony Lambert, pastor of First Baptist Church of Picayune, also asked the Council to consider opting out. He gave his experience of what happened in Denver while he lived there.

He said the lack of proper regulation led to children getting a hold of gummies that contain THC, the active chemical in marijuana, and old abandoned buildings being converted in to grow operations that resulted in the city having a defining odor. He said the resulting smell should be something the Council should consider, describing driving through Denver as Picayune being down wind from Bogalusa’s paper mill on a bad day.

Councilor Jan Stevens asked how medical marijuana was provided to students in Denver. Lambert said the medicine was dispensed by the school nurse and students were not allowed to smoke it, implying it was administered in some other form.

Rev. Allen Hickman also addressed the Council to ask its members to opt out. He said the matter was not about medical marijuana, but about big industries coming to Picayune. He said that in other places where marijuana was legalized for medical, and in some areas recreational use, every negative crime stat increased. He asked the Council to wait until July 1, when the Mississippi State Department of Health and Department of Revenue will release their rules and regulations.

County Administrator Adrain Lumpkin was asked to update the Council on what the Board of Supervisors plan to do.

He said the Board met on Tuesday until about 4 p.m. going over a county ordinance. He said that to his knowledge the Board will vote to opt in, at least to allowing growing facilities. When Turange asked what the Board might do if both cities opted out of the distribution part of the program. Lumpkin said his guess would be that the Board would opt in to all aspects, allowing manufacture and distribution in the county.

The Council will hold a Public Hearing on Tuesday, April 19, at 5 p.m. in City Hall concerning opting in or out of the medical marijuana program.