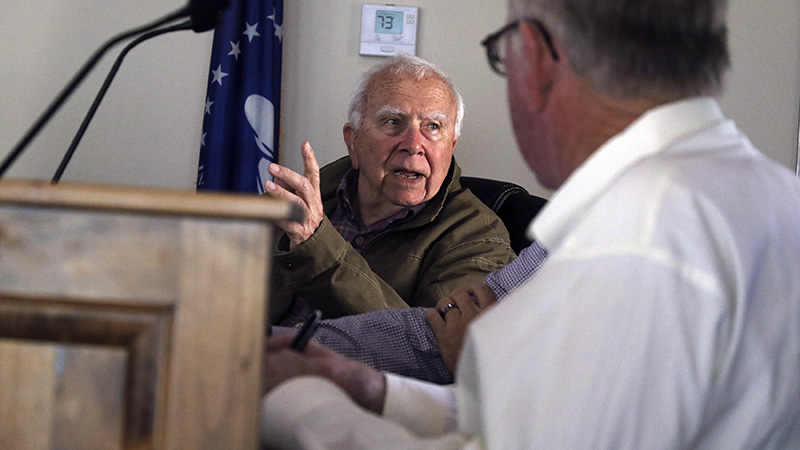 Pearl River County Board of Supervisors attorney Joe Montgomery provides legal advice to the Board during Wednesday’s meeting. Photo by Jeremy Pittari

Members of the Pearl River County Board of Supervisors received an update on phase two of the county wide paving plan and heard some concerns about how some traffic incidents have been handled recently.

Les Dungan with Dungan Engineering informed the Board that the bridge replacement work on Walkiah Bluff Road is now complete. He then presented each Board member with a map of roads planned for repair in the second phase of the project.  So far, most of the work conducted has been within District II, involving the placement of about 960 tons of asphalt for the purposes of leveling and base repair.

By early April, Dungan said he expects to receive pricing for the second phase of overlay and concrete costs. He was quick to warn the Board that prices would be higher this year than last. Last year the cost per ton was about $90, current pricing is showing a ton is now $168. However, with phase two expected to require about 2,500 tons of asphalt, he hopes discounts will be provided for large volumes.

Board President Sandy Kane Smith said that in previous discussions with Huey Stockstill III, the local asphalt plant typically makes batches of 100 tons of asphalt each, but can’t make a batch any smaller than 70 tons or the company will lose money.

District II Supervisor Malcolm Perry brought a couple of concerns before the Board during the meeting. The first involved complaints of a trooper with the Mississippi Highway Patrol showing up at the scene of a recent vehicle fire on Interstate 59 and making a McNeill Volunteer Fire Department firefighter stop fighting the fire so he could move his fire truck to allow traffic to resume. After the fire truck was moved, the unnamed trooper left the scene and did not work the incident, Perry said the firefighter told him.

Rob Williams with the Pearl River County Sheriff’s Department said that there is state law that only troopers with MHP can close an interstate. He cited a previous incident years ago where a pedestrian was struck on the interstate, leading to both lanes of traffic essentially becoming a crime scene, but Sheriff’s Department personnel were unable to close the road until a trooper arrived.

While both Williams and Perry said most troopers, especially those who either live in this area or work it regularly, have a good working relationship with local first responders, there are some who come from out of the area who are more difficult. Perry then asked for the contact information of a person within MHP to address the concern.

Perry also addressed concerns about on local tow truck drivers leaving debris at the scene of collisions at times. One recent incident involved the tow truck operator leaving a ladder and tools at the roadside that had come from a vehicle involved in a recent collision. Perry also asked how tow truck rotations work. Williams said that tow companies can be added to the rotation list by undergoing a background check through MHP. Then, that company is added to the rotation list used by dispatchers, one for the north and another for the south ends of the county. By having a north and south list, response times are quicker. As for the debris being left at the scene of some incidents, Williams said most tow truck operators are diligent to ensure any debris associated with a vehicle is collected and put back in the vehicle. If a truck operator begins to provide problematic service, they can be removed from the rotation list, Williams said. However, he suspects the incident Perry described was due to a part time operator covering for someone who was taking time off.