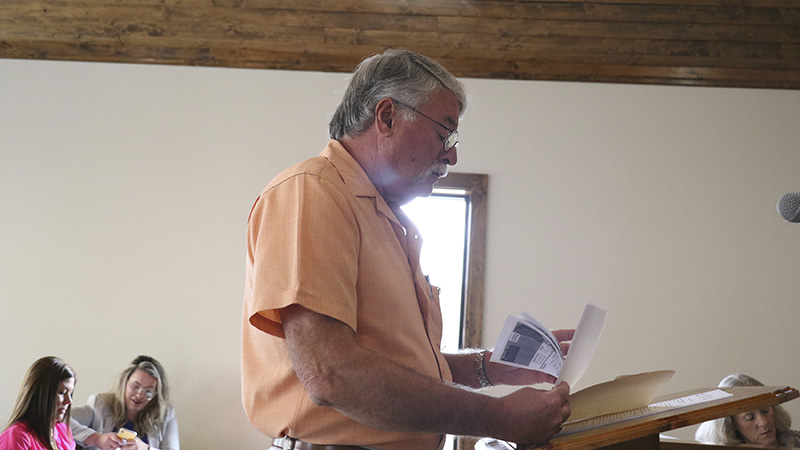 Pearl River County Sheriff David Allison asks the Board of Supervisors to consider attending or entering their own recipe in an upcoming gumbo and dessert cook-off set for March 19 in Picayune at Crosby Commons. Photo by Jeremy Pittari

Installation of septic tanks instead of a centralized sewer treatment system as planned at a subdivision currently under construction was discussed during Monday’s meeting of the Pearl River County Board of Supervisors.

County Administrator Adrain Lumpkin said the developer of a subdivision along Ceasar Road has decided to not install a centralized sewage system as originally planned, even though sewer lines have already been installed. That will mean any plots sold will have to go through the Mississippi State Department of Health to determine if each lot can sustain the installation of a septic tank. Community water is available in the subdivision so water wells will not be needed.

Since each lot is a different size, and soil composition differs throughout the county, each lot will have to evaluated by the MSDH to determine if it can sustain a septic tank. That might be a problem since some lots are less than an acre in size, Lumpkin said. The Board decided to leave that matter up to MSDH since that agency will be the deciding factor.

During the meeting, Sheriff David Allison invited members of the Board to an upcoming Gumbo and Dessert Cook-off in Picayune, set for March 19, at Crosby Commons starting at 11 a.m. He said they can either choose to enter their own recipe or just enjoy the entries submitted by others for a $15 fee to enter the grounds. Funds raised will help the city match a $1.9 million BP grant that will be used to update parks in the city.

The Board also approved a motion to accept a bid from Development Property Services totaling $10,000 to remove nine trees from the Carriere walking track. That bid includes stump grinding. Board President Sandy Kane Smith recused himself from that matter.

A request to hire a part time person in the 911 communications department was also approved by the Board. Carey Meitzler said the hire is needed to help meet a deadline to get the new 911 dispatch system 911 complaint in terms of a road database to ensure addresses and locations are correct. The new database will include photographs of the outside of each address in the county to help first responders find homes or locations easier while responding to a call. Current staff in the office are inexperienced with the steps needed to complete the task, but the proposed new employee completed that work recently in Lamar County. Meitzler added that he expects a current employee to retire in the next couple of years or so.

The Board also heard a presentation from Kendall McClinton, owner and operator of Inmate Communications, a company that is currently under contract to provide phone services to inmates at the county jail. His proposal was to add the ability for inmates to communicate with family via video conference calls through a tablet. He said that if the Board agrees to move forward with the change, his company could install one tablet per four inmates that can be used to communicate with the outside world via video calls.

Concern was expressed by members of the Board about destruction of the tablets. McClinton said that in his experience since the tablets are their only way to communicate with friends and family, there is a level of respect and accountability in the treatment of the devices.

The Board decided to take the matter under advisement and have Board attorney Joe Montgomery review the current contract and see if it can be extended, negating the need for a bidding process.