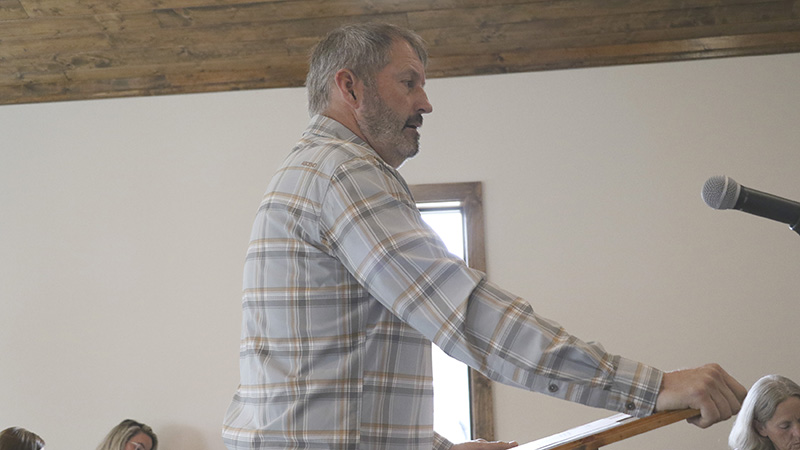 Les Dungan with Dungan Engineering updates the Pearl River County Board of Supervisors concerning upcoming bridge and road work planned within the county during Monday’s meeting of the Board. Photo by Jeremy Pittari

During Monday’s meeting of the Pearl River County Board of Supervisors, the Board approved the best and lowest bid to replace a bridge on Pine Grove Road.

Les Dungan with Dungan Engineering said the best bid was submitted by Fred Fayard Inc., for a total cost of $519,883. Dungan said the company that won the bid was the same that recently replaced a bridge along Walkiah Bluff Road, so the county knows they do good work. He expects the work to start within two months, at which time a section of that road will be closed.

Bids for the second phase of the county wide paving project are currently being accepted, which requests costs for paving, cement for road bed stabilization, culverts and a price for mixing, in case that service is required.

The rising gas prices caused Board President Sandy Kane Smith to inquire how the second phase of the paving project will be handled in that respect. Dungan said one way to handle that is to include a fuel adjustment clause in the contract so that expense can be changed to reflect current pricing. Since the price of fuel is unknown a year out, bids are at times submitted with some “padding” to compensate for fuel prices.

In other business, Dungan suggested the county abandon a section of road along Dumas Bailey that leads to only one property owner. The 3,000 foot section of roadway from the brick entry way of the road to the home is being considered for abandonment.

As to how drivers will be able to exit the area if they come to what may soon be a private road, Dungan said there is a “funny intersection” that can act as a place to turnaround.

The Road Department is dealing with the effects of the world wide shortage of parts and supplies and how that relates to aging vehicles. Road Department Manager Charlie Schielder said he has noticed that it is becoming increasingly harder to find parts for vehicles that are 10 years and older. On the flip side, replacing vehicles with new ones can take up to a year.

In response, when one of the vehicles in his department breaks down, he will buy extra parts to ensure any duplicate vehicles in the fleet can be repaired when they break down.

The lack of parts to fix downed vehicles means his crews have to travel further in less vehicles to complete jobs, especially when working in the north end of the county.

Also, parts ordered to repair the tractor that was vandalized back in February are still on back order from Mexico. That will mean the one-year-old $146,000 tractor will remain out of commission until those parts arrive. According to previous coverage, someone cut the fuel and Freon lines and cut a wiring harness on the vehicle while it was parked near a home in the county, resulting in the county needing to spend $5,300 to repair it.

Methamphetamine found during traffic stop, and service of warrant