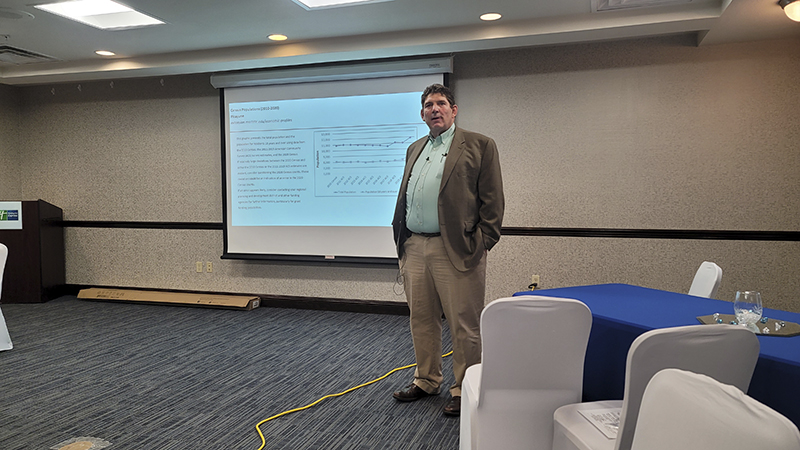 Alan Barefield, Extension Professor of Agricultural Economics with the Mississippi State University Extension Service, gave an economic outlook of Picayune and Pearl River County on Thursday to members of the Greater Picayune Area Chamber of Commerce. Photo by Jeremy Pittari

Pearl River County is in a prime position for growth, but there are some hurdles that need to be overcome.

That was the general message provided by Alan Barefield, Extension Professor of Agricultural Economics with the Mississippi State University Extension Service, during his presentation to members of the Greater Picayune Area Chamber of Commerce Pearl River County.

During the presentation, attendees learned that, statewide, the population fell during 2020. However, within Pearl River County, the city of Picayune and county as a whole saw slight growth, increasing in the city from 10,878 to 11,885 and in the county from 55,834 to 56,145. That brought the county up to 16th place in the state in regard to population.

According to Barefield’s presentation, a there was a large number of younger people added to the population. He estimates Stennis Space Center employment played a part in that since most of the center’s employees live here. That fact leads him to suspect the population could grow more if those young people decide to stay here to have families.

However, the statewide decrease in population almost meant Mississippi would have lost a congressional seat. Most of the state’s population loss was seen in the Delta.

Another change seen from the Census was how people identified themselves. He said there was a 258 percent increase in the number of residents who identify as being of two races, from 191 in the 2010 Census to 684 in the 2020 Census.

Housing in the city limits of Picayune also saw an increase, rising from 4,891 to 5,356 homes.

Most of the jobs in this county are considered to be in the government sector. Barefield was quick to add that the statistic is not necessarily an indication that there are too many people working in government because the statistic includes healthcare workers who work for Highland Community Hospital and Pearl River County Hospital and Nursing Home since Forrest Health System either owns or manages those facilities respectively. Government jobs also include those in education and local government. Barefield did say that the highest concentration of earnings is in state and local government.

The second highest employment sector in this county is in retail.

As for the economic status of the city and county, this area does have to deal with the draw of businesses offered in surrounding areas, such as Slidell, that are not located in Picayune. To combat the leakage associated with that fact, he suggested the community engage in a shop local campaign. As for attracting the next chain steak house to the area, he said many companies consider the population when looking for new locations.

Other factors affecting businesses right now are supply shortages, rising energy costs and the difficulty in finding and retaining employees. Barefield said he heard a recent report that the gas price surge will most likely last at least until November, but he reminded the attendees that the market is fluid  and events occurring overseas can play a part.

To combat the supply shortage, such for operation supplies, he suggested businesses could pool together to make large orders of items they can share.