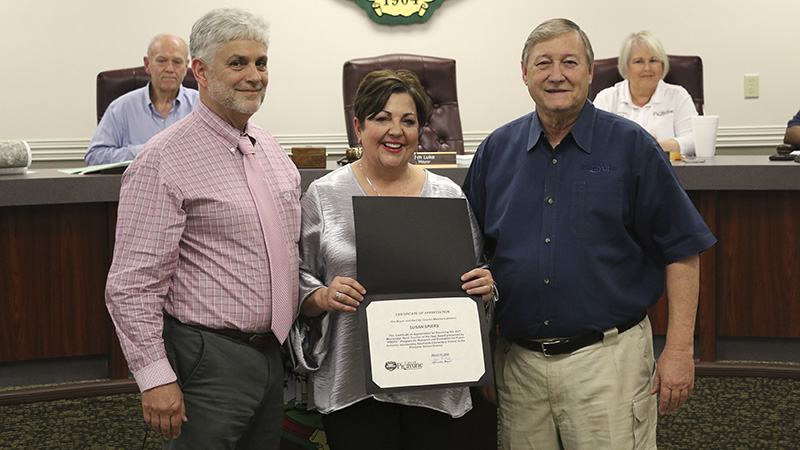 An empty seat on the Picayune School District’s Board of Trustees that has been vacant for nearly a year, will remain vacant after a nomination submitted by Frank Ford Tuesday night did not gain a unanimous vote.

While every member of the Council was in attendance during Tuesday’s meeting, two voting members had to recuse themselves from the matter; Picayune School District teacher and Council member Anna Turnage and part time/substitute teacher and Mayor Jim Luke.

City attorney Nathan Farmer said that Luke works either part time for the district, or acts as a substitute, and Turnage is a full time employee of the school district. Those two recusals left only four members to vote on Councilor Frank Ford’s nomination of Jan Sweet to fill the empty position. The position has been vacant since Ford, who served on the School Board until his election to the City Council last year, had to step down to assume his new responsibilities with the city.

When it came down to a vote, Ford and Councilor Jan Stevens voted for Sweet’s nomination, while Councilors Larry Breland and Lynn Bogan Bumpers voted against.

At the end of the meeting, Rev. Brian Dees took to the podium to express his concern that the position has remained vacant for nearly a year, and said he would like to see another African American appointed to that Board. He added that since the Council is responsible for appointing three of the School Board’s five members, and two members of the city’s current administration have to recuse themselves on the appointments, he wonders how it will ever be resolved.

With another position on the Board needing an appointment or reappointment within the next year, Dees asked the Council to consider his feelings and ensure the Board has fair representation in relation to the city’s 60/40 split concerning population demographics.

In other business, the Council approved a motion to sell a bit more than six acres of land in the industrial park to a company called Americlean, which will provide medical waste and Animal and Plant Health Inspection Service program disposal services. Glenn Neal, who spoke on behalf of Americlean, said the operation will employ about eight people at the start. Work at the facility will ensure those types of waste are properly processed inside the proposed 6,000 square foot facility to make them suitable for landfill disposal. Neal said the plan is for the facility to be able to employ about 25 people within the next three to four years.

Pearl River County Economic Development Director Lindsay Ward said the process the company will use to process the waste is tightly controlled and establishment of this business will be good for the area. Ward said Americlean plans to invest $2 million into the construction of the facility.

The Council also approved the sale of another parcel of land in the industrial park to TLC, but much less information about this company was shared during the meeting. Ward said the project is still in the “due diligence” phase so she could not provide much detail other than the new company would provide about 50 jobs and the cost to construct the facility was estimated to be between $8 to $10 million a few months ago, but that investment may be higher due to rising costs. Ward said more information will be released at a later date.