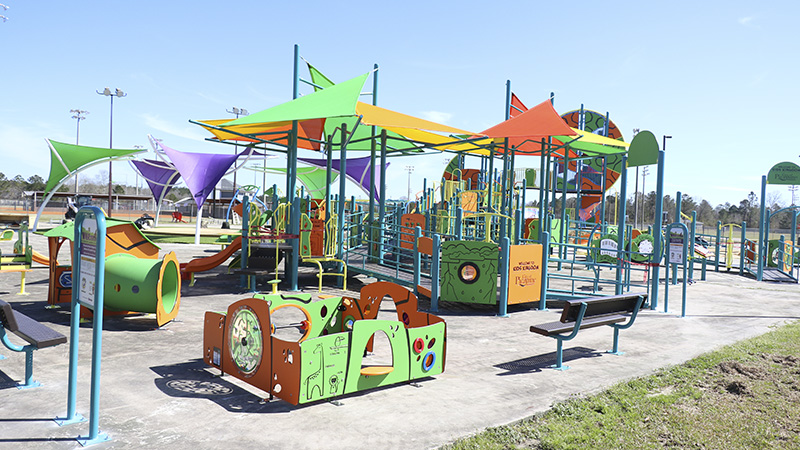 A gumbo cook-off set for this Saturday will aim to help raise funds to cover the city's 20 percent match to receive $1.9 million in BP grant funds. Some of those funds are being used to build this new version of Kids Kingdom. Photo by Jeremy Pittari

The new playground at Friendship Park is nearing completion, with only the soft surface left to install.

During the City Council’s meeting held on March 15, Parks and Recreation Director Trevor Adam updated the Council about the progress being made at Friendship Park. He said once the soft safe surface is installed, a grand opening for the new playground will be scheduled. That equipment was installed as part of a $1.9 million BP grant, which will also fund other improvements at the park such as turf on the ball fields, additional concession stands and restrooms.

Adam also said he has had discussions with Coast Electric concerning having Coast Connect provide WiFi service at the park.

Code Enforcement Officer Tom Milar informed the Council that nine new businesses have opened up in the city, and 10 new building permits were issued.

Dia Brumfield with the Public Works Department informed the Council that crews have completed concrete installation at the site of the second phase of the alley way project on East Canal Street. Additionally, plumbing to the splash pad has been repaired and new landscaping at the Greater Picayune Area Chamber of Commerce was planted.

Craig Franklin with Dungan Engineering presented the Council with maps of the city identifying 21 places in the city that have drainage or flooding issues. He asked each Councilor to choose the one issue within their respective precincts to have repaired immeditately since all 21 can’t be repaired at the same time.

City Manager Freddy Drennan suggested each Councilor choose an issue to repair that could result in residential or commercial flooding. The plan is to begin repairs on those issues as soon as each Councilor responds with their priority project.

In other business, the Council denied a request from Bill Edwards to subdivide one lot located at 1501 Fourth Avenue into lots, which is zone R-1.

Todd Brown, a resident of that area, spoke against dividing those lots during the meeting. He said it is his understanding the lots will be turned into two rental properties.

“If we allow this to happen what will prevent others from doing the same?” Brown said.

Milar said the request was denied by the Planning Commission because previous requests of a similar nature were denied in the past. Allowing this request to be approved would be a conflict, he said.

After some discussion, the Council approved a motion to deny the request.

The Council also approved a request from the Picayune Police Department to amend its contract with Axon Body Worn Cameras to add three more cameras to the contract at an additional expense of $14,309. Assistant Chief James Bolton said the department is applying for a grant to defer most of that expense.