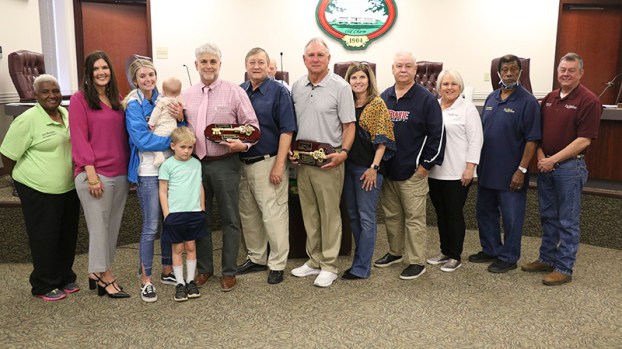 Dean Shaw, center left, and Dodd Lee, center right, were presented with keys to the city by the Picayune City Council for being inducted into the Mississippi Association of Coaches Hall of Fame this year. Photo by Jeremy Pittari 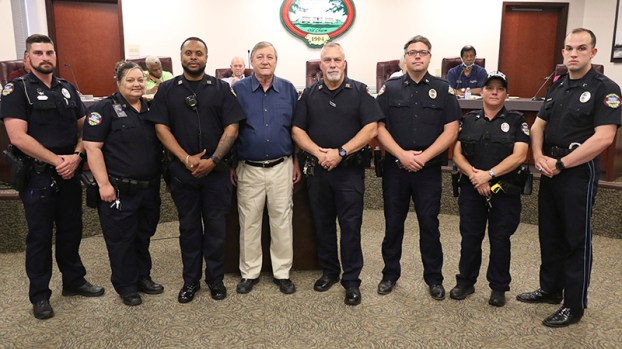 Two professional coaches and one citizen coach were recognized during Tuesday’s City Council meeting for their efforts.

Dodd Lee, a now retired Picayune Maroon Tide football head coach, and Dean Shaw, a former basketball coach for the Maroon Tide, were recently inducted into the Mississippi Association of Coaches. For that honor, Mayor Jim Luke presented both of them with keys to the city. Both coaches have brought home state championship titles for their respective sports during their coaching careers. While Lee is now retired, Shaw continues to serve the community as the Picayune School District’s Superintendent.

Harvey Miller, a citizen coach for the Maroon Tide’s youth football league, who is also the city’s assistant city manager, was recognized by Ty Gill with the inaugural Citizen Coach of the Year award for his efforts in coaching young football players in the youth athletic program. A video made by Gill was shown to attendees of the meeting where Gill and Picayune School Board of Trustees member Josh Robertson described the many things Miller has done to help and influence young people in that league, many of whom go on to play in the Maroon Tide’s varsity football team.

Robertson said he has seen many instances when Miller paid for a child’s registration fee because the family could not afford it, and times when Miller transported children to practices and games for the same reason. Miller was also said to consider the children he has coached as his own.

Also during the meeting, Picayune School District gifted teacher Susan Spiers was recognized by the Council for being named the 2021 Mississippi Rural Teacher of the Year.