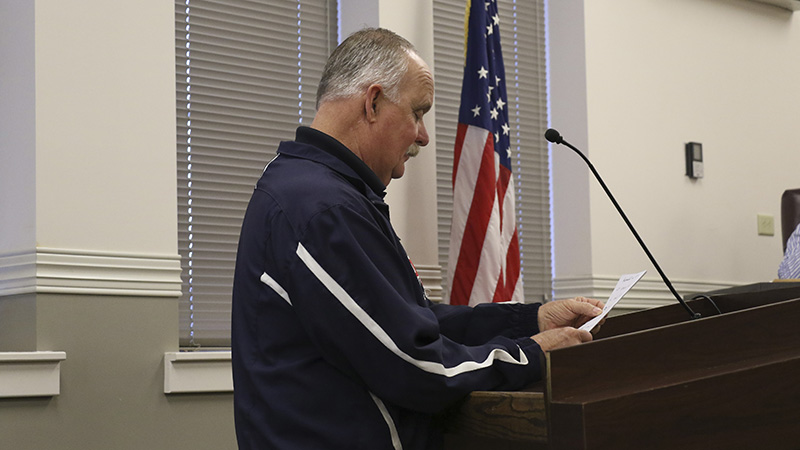 Fire Chief Pat Weaver updates the Picayune City Council concerning installation of free smoke detectors in homes within the city for those who need them. Photo by Jeremy Pittari

Picayune’s City Council discussed various projects underway in the city and the installation of free smoke detectors during Tuesday’s meeting.

Since the last Council meeting, police officers have responded to 576 calls and conducted 16 arrests, four of which were for felony offenses, said Police Chief Joe Quave.

Within the Public Works Department, crews have completed drainage repair work on Hickman Avenue and installed underground utilities in the alley on East Canal Street in preparation for the second phase of the alley project, said Public Works Director Eric Morris. The first phase of that project created a decorative alley now named Canal Place across the street from where phase two is underway.

Other work in the city completed recently includes repaving the entrance to the Woods Subdivision, clearing of vegetation at and pressure washing of the old Valspar building and trimmed tree limbs over the streets in several places within the city.

Morris said that utility relocation in preparation of phase two of the Highway 11 widening project is moving along and crews are stamping the concrete median as part of phase one to look like the pavers installed in other parts of the city.

An ornate street light set for installation at the end of Goodyear Boulevard should be installed soon, Morris said.

Morris also has some drainage projects he is working up, including one along Birdie Circle.

In other business, City Manager Freddy Drennan said he has been holding meetings with members of the golf cart and to go cup committees. Those committees are assisting the city in determining ordinances in relation to to-go cups for alcoholic drinks during certain events in the city and the use of golf carts on city streets.

During Tuesday’s meeting, the Council approved a motion to allow Mayor Jim Luke to seek the services of Butler Snow to assist in the city’s redistricting effort. However, since elections for county offices will occur before any elections in the city, that process for the city of Picayune will not begin for at least two to three months, Drennan said.