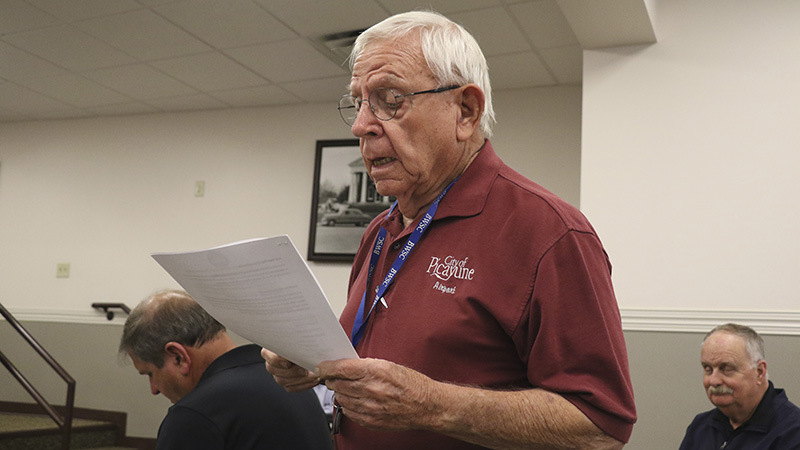 Airport Manager Andy Greenwood provides the Picayune City Council with an update concerning installation of a new weather monitoring system at the city’s Municipal Airport. He said the project is expected to be complete within the next two weeks, weather permitting. Photo by Jeremy Pittari

A long standing empty seat on the Picayune School District’s Board of Trustees was discussed during Tuesday’s Picayune City Council meeting.

Councilor Frank Ford, who previously held that seat but had to step down after he was elected to the Council last year, brought the matter before the Council at the end of the meeting.

Since Ford took office as a Councilor in July of last year, his seat on the School Board has remained empty. The issue at hand appears to be that two members of the Council will have to recuse themselves in order for the four remaining members to nominate and unanimously vote for that person. City Attorney Nathan Farmer said the city’s current form of government requires at least four votes to pass a motion of any kind.

Councilor Anna Turnage is an employee of the Picayune School District and Mayor Jim Luke also appears to have some tie to the school district that would force him to recuse himself during the selection of a new School Board member.

That tie was alluded to when City attorney Nathan Farmer said the Council can take action on selecting a new member to that Board, but that will require someone to stand in for Luke as Mayor Pro Temp and all four members will have to agree on the appointee. An attempt to contact Luke for clarification on that tie was unsuccessful by press time.

Farmer said according to ethics commission opinions he has read in the past, there is the option to send the matter to the governor, but according to what he has seen in year’s past, if there are enough members of a particular governing body to make that decision, the governor does not get involved.

If, for some reason, an appointment to the School Board can not be made with the four remaining Council members, then the Council can ask the Governor to make the decision.

Ford said his concern is that the position has been open for six months, making it more difficult for the remaining members of the School Board to have enough members present to have a quorum. He then asked City Manager Freddy Drennan to add the matter to the next Council meeting’s agenda so the Council can take action.

Farmer said the Council will need to discuss that appointment in open session.