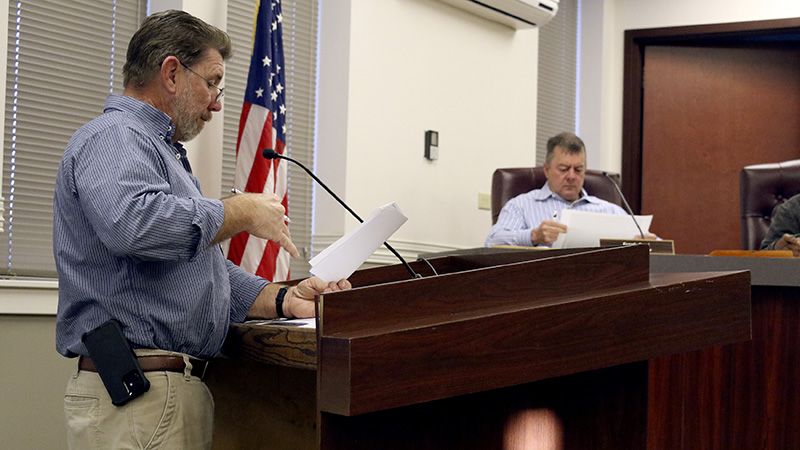 From left, Public Works Director Eric Morris explains the need to add about three more acres to the city’s cemetery as Councilor Frank Ford looks over a graphic of the proposed plan. Photo by Jeremy Pittari

The Picayune City Council approved a motion to expand the city’s cemetery by about three acres during Tuesday’s meeting.

Public Works Director Eric Morris said the lot in question is already owned by the city and about 75 percent cleared of trees and brush. Any additional clearing of the property to make it ready for plots will be conducted by city employees.

Morris estimates the additional acreage will provide for about 400 more plots at the cemetery located on Palestine Road. He said the city also owns about 36 additional acres to the south of the current cemetery for future expansion. The Council approved his request to expand the cemetery by about three acres.

During the meeting, the Council was also introduced to Dungan Engineering’s newest employee, Devin Hedgepeth. Hedgepeth is a Picayune Memorial High School graduate who is replacing another engineer who left Dungan Engineering to start their own business.

The Council also approved a request to surplus and sell an emergency backup generator previously used on water wells in the city. Morris said the city no longer needs the generator since the city entered into a memorandum of understanding with the Pearl River County Utility Authority concerning the use of a much larger generator for the same purpose. The plan is to use the proceeds from the sale of the old generator to purchase a dewatering pump for the water department.

In other business, Councilor Anna Turnage asked Craig Franklin with Dungan Engineering if an assessment of flood issues in the Ridgecrest Subdivision has been completed as she requested during a previous meeting. Franklin said that while some studies have been conducted to alleviate flooding in the city, he would have to check on Ridgecrest specifically and get back with her.