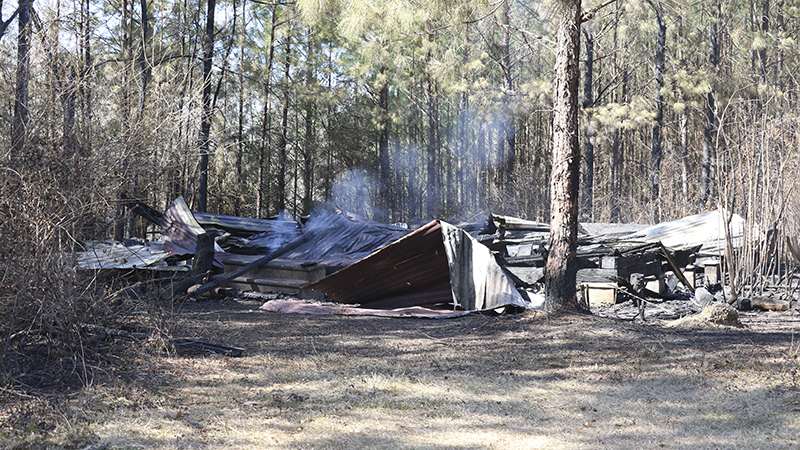 This house along Anchor Lake Road burned down after a trash fire that turned into a brush fire caught it on fire. The house was abandoned at the time of the fire, so no injuries were reported. Photo by Jeremy Pittari

Volunteer firefighters in Pearl River County have been busy over the weekend, working about 10 brush fires in just two days.

McNeill Volunteer Fire Department Fire Chief Donnie Leonard said he and fellow volunteer firefighters across the county have been busy the last couple of days, with Saturday being the busiest day for brush fires.

That extra work is mostly due to people burning trash or debris and letting the fire get out of control, leading to brush fires in several areas of the county.

On Saturday alone, Leonard said his department and several others responded to about eight calls in varying locations. Sunday, only two brush fires were reported.

One of those brush fires that occurred on Saturday resulted in a home being destroyed by the flames. Leonard said the home, located on Anchor Lake Road near the entrance to Dove Ridge, was abandoned so there were no injuries. He said McNeill VFD provided assistance to Carriere VFD for that call, especially since they were already working a call a short distance away when the fire was reported.

That fire started from a trash fire that was not being properly monitored. As of Monday afternoon, the pile of debris was still smoldering.

Anyone found to be responsible for setting a fire that later results in damage to someone’s property could potentially be sued.

“If you set it, you are liable for any damage,” Leonard said.

Brush fires were also reported along Henleyfield McNeill Road, Sones Chapel Road, and one was reported near the Hills Subdivision over the weekend. Leonard said he and other volunteer firefighters were out near the Hills Subdivision until about 2 a.m. Sunday morning to ensure no homes were damaged. Leonard attributed the high number of woods fires to dry conditions and high winds that occurred over the weekend.

If county residents decide they have to burn debris, they should try to do it on days that are not excessively dry and or windy. Leonard also said that weekdays are the worst days to expect a large response of volunteer firefighters, since most of these individuals have jobs to report to Monday through Friday.

When burning debris, it’s best to do so on days with low wind, and to have some sort of extinguishing device close at hand. That can include a charged water hose or chemical fire extinguisher, or better yet, both.

It’s also best to not leave any fire unattended, even for what may seem to be short period of time.

“That’s the statement I get the most, ‘I just walked inside for minute and then it was out of control,'” Leonard said.

If someone is planning to conduct a controlled burn of large piece of property, Leonard asks that the person doing the burning call dispatch so firefighters will not be dispatched to a call that needs no response.