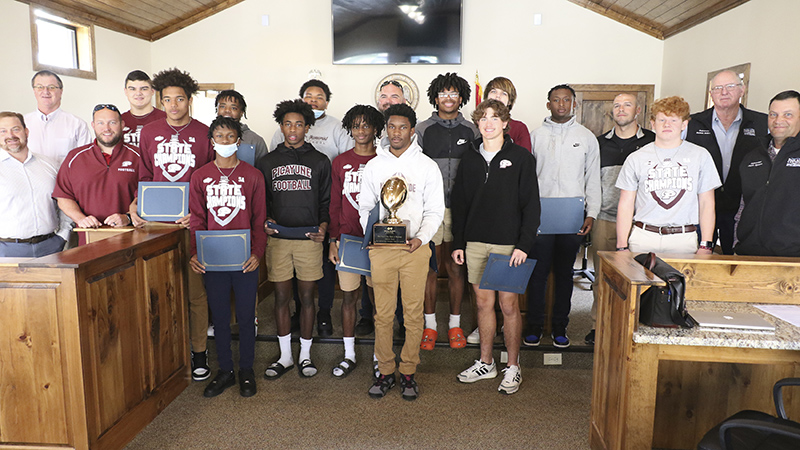 Pearl River County's Board of Supervisors recognized the seniors of the Maroon TIde's varsity football team for bringing home the state championship. Photo by Jeremy Pittari

After recognizing the Picayune Memorial High School Varsity Football team for winning the 5A State Championship, discussion was held by the Pearl River County Board of Supervisors concerning recent vandalism to county equipment.

During Wednesday’s meeting of the Board, each senior in the Maroon Tide’s team was presented with a certificate recognizing their accomplishment of bringing home the 2021 5A State Championship title.

Board members also discussed the need to do something to curb vandalism to county equipment. Apparently a tractor parked near a home off of Quitman Perry Road in the Henleyfield community had the Freon lines, fuel lines and wiring harnesses cut with bolt cutters, leading to a repair bill of about $5,300 before it can be put to use again. The tractor, valued at $146,000, was purchased less than a year ago and will now be unable to cut grass in areas of the county until the repairs are complete. Road Department Manager Charlie Scheilder said it will be down for a while considering parts to repair the equipment are on back order from Mexico. He expects the parts to arrive in a month or so.

Scheilder added that acts of vandalism to county equipment occur regularly, typically resulting in the theft of batteries and or fuel.

During the meeting, District II Supervisor Malcolm Perry asked if the county could do anything to reduce the number of brush fires recently occurring within the county. Emergency Operations Director Danny Manley said the state issued a red flag warning this week to advise residents not to burn, but that order was not a ban. He added that rains expected to pass through the county on Thursday and Friday should help the situation. Additionally a burn ban would have only prevented farmers from conducting controlled burns because it would negate their insurance coverage.

“Responsible people know not to burn when conditions are not right,” Manley said.

County Fire Marshal Jonathan Head said most of what firefighters are seeing relation to the rash of brush fires is due to  carelessness.