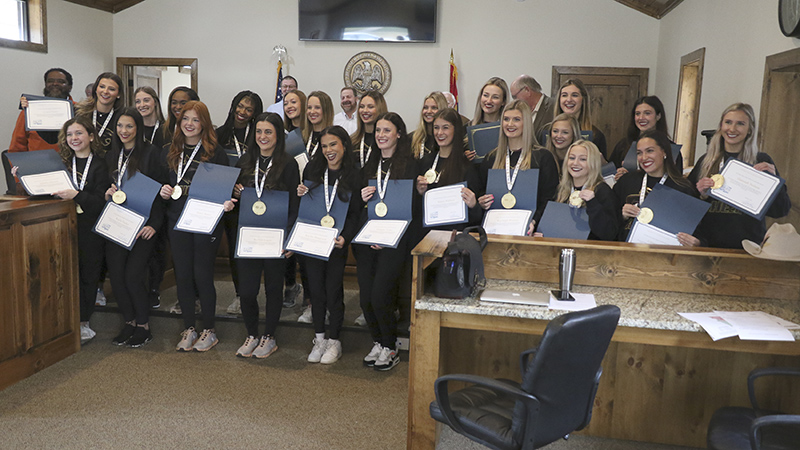 Members of PRCC’s cheer squad were recognized for winning a national championship title while competing against eight teams from four-year colleges. Photo by Jeremy Pittari

The Board also approved a motion to strike the team’s recognition in the Board’s minutes.

PRCC’s cheer squad pulled in the win while competing against cheer squads from eight four year programs during the All-Girl Open Division Championship at the ESPN Wide World of Sports Complex in Orlando, Fla.

During the meeting, each team member’s name was called as she was presented with a certificate from the Board.

Cheer squad coach Sarah Smith said her girls put in a lot of time to get their routine down, and they only got one chance to get it right to bring home the title.

PRCC President Adam Breerwood said the squad worked hard over Christmas break and that experience has shown them that hard work pays off.

State Senator Brice Wiggins also stopped by the meeting to give the Board an update on efforts in the Legislature. He said he and other members of the senate are about to embark on more projects under the Gulf Coast Appropriations fund and he expects to see the tax cut bill move forward. The tax cut bill proposes to cut the rate of tax on food and over the course of a number of years eliminate the state’s income tax, among other things.

While Wiggins was there, District III Supervisor Hudson Holliday asked what the state’s stance was on Kratom. There have been several discussions about the products by the Board recently. Holliday said that since a lobbyist from Washington DC took the time to speak to the Board about reasons not to ban the sale of such products, there must be a lot of money in Kratom.

Ultimately, Wiggins said that to his understanding the state sees Kratom as an illegal substance.

Later in the meeting, Sheriff David Allison asked the Board to continue to consider passing an ordinance that would ban the sale of Kratom based products in this county. He said there have been reports made to the Sheriff’s Department of adult men appearing to be under the influence of some sort of substance, but passing drug tests. When a specialized test was used to test for Kratom, the test came back positive.

Allison said he also checked with Pearl River County Coroner Derek Turnage, who said that last year there were 42 deaths in this county being due to drug overdose. So far this year through the month of January, nine deaths have been confirmed to have been due to drug overdoses, with a tenth possible as the county awaits the results of a toxicology report. County Administrator Adrain Lumpkin said those deaths were not solely based on the use of Kratom products.

“People moved in this county to sell this stuff, who don’t care about the people in this county,” Allison said.” They just want to make a dollar.”

He added that he does not allow the sale of Kratom products in the stores he owns.

No motion was made by the Board concerning banning the sale of those products.