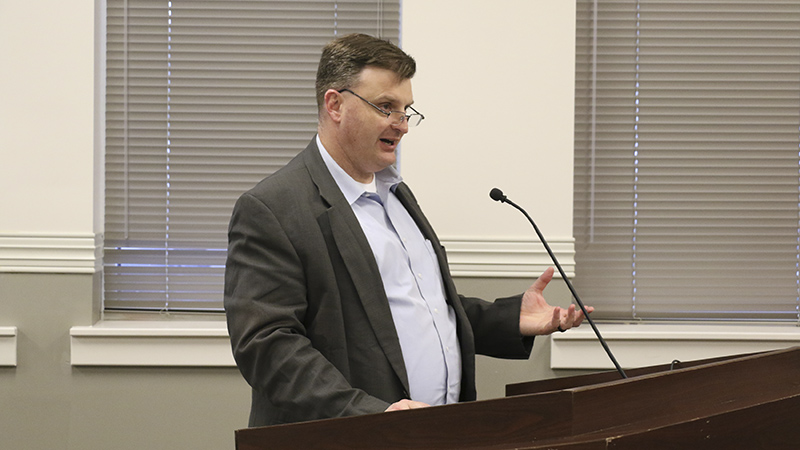 Picayune’s city attorney Nathan Farmer provides the City Council with a quick synopsis of the medical marijuana bill that was signed into law earlier this month by Gov. Tate Reeves during Tuesday’s Council meeting. Photo by Jeremy Pittari

The topic of whether the city of Picayune may consider opting out of the medical marijuana program was broached, but no decision was made.

During Tuesday’s meeting of the City Council, city attorney Nathan Farmer gave a lengthy presentation on the bill signed by Gov. Tate Reeves on Feb. 2 of this year legalizing the use of medical marijuana by approved patients.

The Department of Health will oversee the medical side and collect any fees associated with a person acquiring a card.  That person must first get approval from a licensed medical practitioner to use the substance to help treat applicable medical conditions. Farmer said the approved list of conditions is extensive.

Cards issued to approved patients will be valid for six months, at which time the patient must see their medical practitioner again to see if they still need the substance.

Medical marijuana can only be procured from approved dispensaries, which will be managed by the Department of Revenue.

Cities have until May 2, to decide if they want to opt out. If they take no action, they are automatically in the program. However, if a city opts out that government can decide to opt in at a later date. If the city does not opt back in by an act of the governing body, voters can start a petition and have the matter put on the ballot for a vote.

Even if a city opts out, certain aspects of the program can still take place in a particular area, such as testing and card holders can still possess medical marijuana. Opting out will only keep dispensaries out of the city or county that decides to do so, Farmer said.

There are also certain protections afforded to card holders, such as child visitation can not be denied and schools or day cares can not prevent the administration of medical marijuana to children who have been prescribed the substance. However, employers can still conduct drug testing.

Farmer said the kicker is the Health Department and Department of Revenue are still in the process of developing rules and regulations concerning the sale and distribution of medical marijuana. Farmer said those agencies have 120 days to develop them.

Due to that fact, Farmer predicts a lot of counties and cities will initially opt out until those rules and regulations are set in stone, and then decide if they want to opt back in to the program.