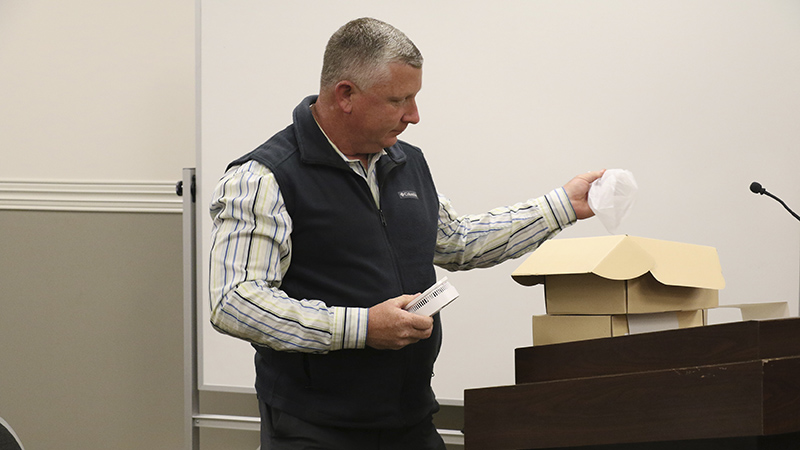 Inspired by the tragic news that the lack of smoke detectors could have played a role in a Slidell area fire resulting in four deaths, a Picayune firefighter and his family donated 100 smoke detectors for installation in Picayune area homes.

During Tuesday’s meeting, Picayune’s City Council accepted that donation of 100 smoke detectors from Glen Neal Jr., who serves as a part time firefighter with the Picayune Fire Department. Neal said his family was inspired to make the donation due to a recent house fire that took place in Slidell, La., on Jan. 19 where two adults and two children died.

Coverage from Louisiana based media outlets state the house had only one nonfunctional smoke detector.

“Early detection in fire service can save a life,” Neal said.

Weaver said demand for smoke detectors through the department’s free smoke detector program has been high. If a city resident needs smoke detectors, they can call the Fire Department at 601-799-0614 to be put on the list. When smoke detectors are available, firefighters will come to the home and install them in the proper places. Weaver said the only requirements are that the home belongs to the resident and the house is within the city limits. Weaver said rental properties typically do not qualify since it is the responsibility of the land lord to install those devices.

In other business within the Public Works Department, several projects have been underway. Public Works Director Eric Morris said his crews have repaired the exit lane of the Woods Subdivision, performed permanent repair to the water main on Woods Road that was broken by fiber optic installation contractors working for AT&T, and have repainted the floor of the pavilion at Jack Read Park.

His crews also conducted drainage improvements at Hickman Avenue at the intersection of the 700 block of West Canal and re-plumbed the valves to the splash pad at Friendship Park. Earlier this week his crews had plans to install new pump motors at the Municipal Airport’s fuel station.

At the airport, Airport Manager Andy Greenwood said that all 38 T-hangers at the facility are now occupied and the installation of the new AWOS system at the airport is still delayed due to a lack of parts.

For the upcoming Street Festival, Beebe said she has been able to expand the event’s footprint out to the first two blocks of West Canal Street. That provided her with 56 more spots, of which only 18 were available as of Tuesday’s Council meeting.