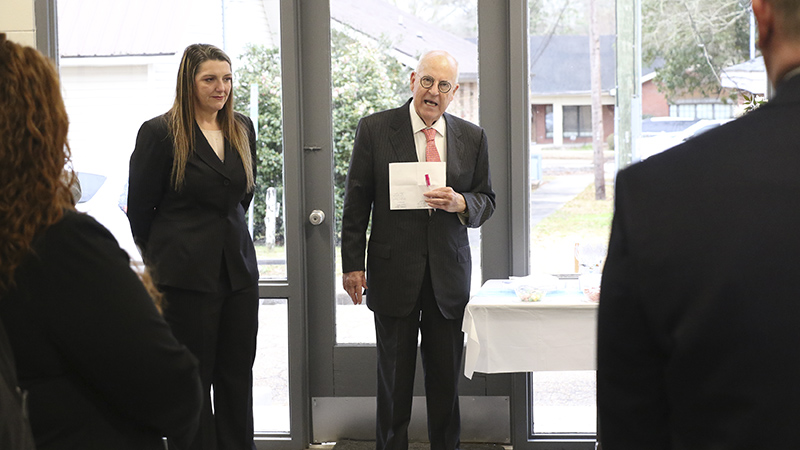 What was once the old Health Department building in Poplarville will now serve as the location of the 15th Circuit Intervention Court program for this area.

Fifteenth Circuit Court Judge Prentiss Harrell said that at one point in the structure’s history there was a wall that segregated those who came for care.

“I’m so glad we tore that wall down,” Harrell said.

Prior to moving to the new location on West Pearl Street, which is right around the corner from the County Courthouse which houses Pearl River County’s Circuit Court, participants in the program had to drive to Millard where the program operated out of an old double wide trailer.

Fifteenth Intervention Court Field Officer Casey McInnis said the facility was turned over to the program back in October, and since then she and two trustees have been working to renovate the interior. Harrell said the building was constructed in 1963, and will serve the program well.

Intervention Court is a program that helps those who have been convicted of misdemeanor drug crimes get back on their feet. Harrell said the program requires participants to obtain their GED if they don’t have it, maintain employment and undergo regular drug testing. Since the facility is so roomy and has many restrooms, it will serve the many of the court’s needs well, Harrell said.

McInnis also shared a success story of a participant of the program. Skylar Davis, who recently graduated from the Intervention Court, now has a regular job and recently purchased her own home.

While work to renovate the building began back in October, McInnis said that in the past week or two she had a team of seven trustees who helped her get the facility ready to serve the participants.

Within the five counties included in the 15th Circuit Court of Mississippi, there are 250 participants in the intervention program, 75 of which are Pearl River County residents.

A graduation will be held in the Poplarville facility in June for the current participants who have completed the program.