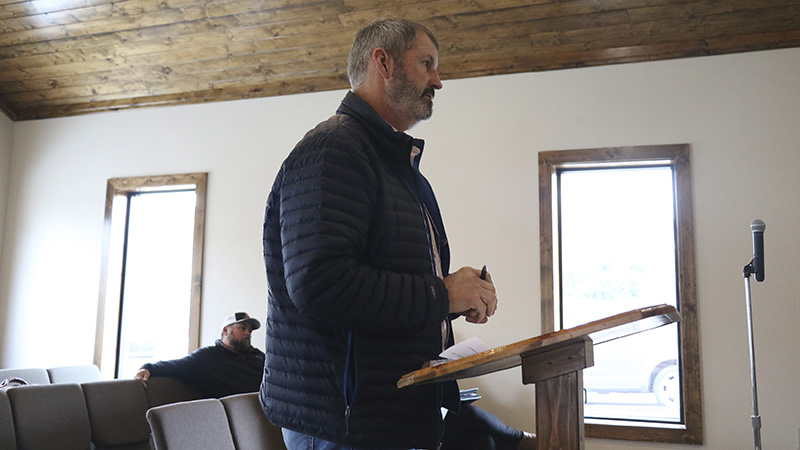 Les Dungan with Dugnan Engineering speaks with the Pearl River County Board of Supervisors about the next steps needed to start phase two of the countrywide paving project. Photo by Jeremy Pittari

Les Dungan with Dungan Engineering suggested the Board move quickly on forming a list of roads to complete, since he expects paving projects across the region to ramp up. That means that there may be a shortage of contractors to help get the roads complete.

Work on phase 1 of the project is still underway, with 35.5 miles completed since the project began in June of last year when roads still under construction, including Mt. Carmel, Buccaneer Circle and two roads off of Buccaneer Circle, are complete. Some of the set backs are due to weather, since Dungan said the surface temperature has to be 50 degrees or more for hot mix installation.

In preparation for phase 2, Dungan asked the Supervisors to review the roads in their respective districts. Since some districts got more miles paved in phase 1 than others, the destruction of miles in phase 2 will be shifted to reflect that fact.

Each supervisor was asked to provide him with a list of priority roads they want paved and to consider what method would be best, hot mix or DBST.

In some instances, the cost to use DBST may come close to the cost to use hot mix since base repairs would be more extensive in some DBST applications, especially those that will need a lot of concrete to be mixed with the base.

The Board also discussed whether to use painted striping on some roads or raised, reflective markers. Dugan said the reflective markers can be installed at $12 per marker when installed on six miles or more, totaling about $1,200 per mile since about 100 are required per mile.

The markers are said to last longer and are easier to see for drivers operating vehicles at night.  The Board tasked Dungan with securing bids for that work.