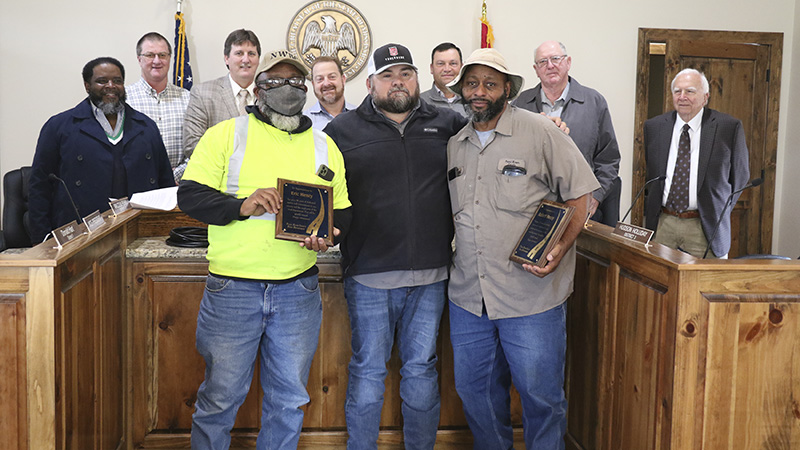 In the front row from left, Eric Henry, Road Department Manager Charlie Scheilder and Robert Henry pose for a photo after the Henrys were presented with plaques for their decades of service to the county’s Road Department. Photo by Jeremy Pittari

Two long time employees with Pearl River County were recognized for their decades of service before their retirement.

During the Jan. 19, meeting of the Board of Supervisors, Eric Henry and Robert Henry were presented with plaques for their years of service now that they have decided to retire from employment with the county. Both worked with the county in the road department for more than 25 years.

The Board also approved a bid to conduct expansion and repair work at the county fairgrounds in Poplarville. The winning bidder was Clymer Contracting, who turned in a bid of $499,297 for the base project work and a bid of $126,548 for the optional additional work. Even though that bid was higher than the engineer’s estimate of $567,671 for both options, Clymer Contracting’s bid was still more than $150,000 less than the other two competing bids.

Les Dungan with Dungan Engineering said the cost of everything is on the rise, including construction costs and materials. The project will include steel work, concrete footings, electrical repairs and upgrades and expand bases in the front and back of the fairgrounds. The initial project will include two 25 foot bases to the back of the structure, while the alternate addition will be a third 25 foot section. All lights at the facility will be replaced with LED lighting and the one power panel will be replaced with three panels so lights can be turned on in stages to save electricity during practice sessions.

In other business, the tax parcel issue brought before the Board during the last meeting of December has been resolved. That property is located in Poplarville and owned by Nelson and Kathy Smith. The owners of the property in question alerted the Board to the fact that their home had been sold in a tax sale accidentally. Tisha Johnson with the county tax office said the issue appeared to have been due to a parcel belonging to the state being double assessed. To resolve the issue, the duplicate parcel will be deleted from the county’s records and the Secretary of State’s office will be notified. Once the process is complete, the tax sale will be null and void.

The current chip shortage affecting supply lines worldwide is also affecting the county’s ability to find replacement vehicles if one breaks down or is totaled. Road Department Manager Charlie Scheilder said he has yet to receive trucks that were ordered back in September, and has been told they may not arrive until 2023. He has heard that there are similar supply issues with law enforcement vehicles.