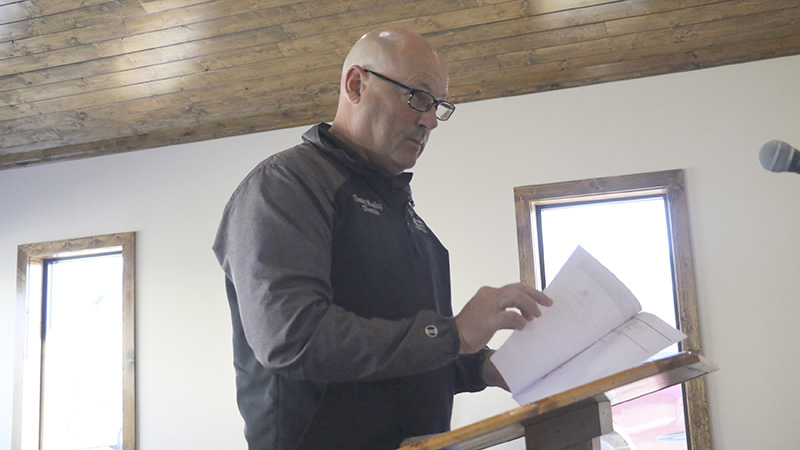 Emergency Management Director Danny Manley asks the Pearl River County Board of Supervisors to start the ball rolling on establishing a fire district in the Hillsdale community. Photo by Jeremy Pittari

Pearl River County’s Board of Supervisors voted against taking a pay raise for themselves and discussed plans for a second round of paving projects.

County Administrator Adrain Lumpkin told the Board that a new statute made the members of the Board eligible for a raise of about $1,300 annually, or $111 per month. Lumpkin said the raise has been available since 2018 when the Legislature passed statute 25-3-13 back in 2018.

District III Supervisor Hudson Holliday made a motion to leave the Board’s pay where it currently stands, which was approved by all other members except for District I Supervisor Donald Hart, who voted against Holliday’s motion. Lumpkin said each Board member is paid $44,700 annually.

A second phase of paving projects in the county was also discussed. Les Dungan with Dungan Engineering said the second phase of the project is expected to include about 60 miles of county maintained roadways. That will mean each district will get about 12 miles paved. He asked each Board member to provide a list of the roads they feel are most in need of repair.

Dugnan also provided the Board with an update on the planned repairs to the weir on the Pearl River near Walkiah Bluff. Recently he was informed the Board would be able to move the project forward, but the Corps of Engineers pushed back on the suggestion by the Wildlife Fisheries and Parks to allow the county to move forward because the Corps was left out of the loop. Now, the suggestion is to have two memorandums of understanding between the county, Department of Environmental Quality and Wildlife Fisheries and Parks. The matter at hand concerns access to about $4 million in funding that could be used to repair the failing weir, which was built back in the 90s to ensure Mississippi and Louisiana got equal amounts of flow from the Pearl River. The failing weir now means Louisiana gets most of the flow, and in times of low rainfall the Mississippi side will likely dry up, according to previous coverage. Dungan has said previously that the $4 million that is available will not be enough to repair the damage.

In a separate matter, a motion was approved to draw up documents necessary to establish a fire district in the Hillsdale community. Emergency Management Director Danny Manley said the move will ensure residents can get discounts on their fire insurance.

Several modular buildings next to the county jail in Millard are in need of roof repairs. Lumpkin said most of the buildings are being used for storage, and it would be cheaper to pay the nearly $20,000 to have all of the buildings repaired so the county can continue to have access to affordable climate controlled storage.