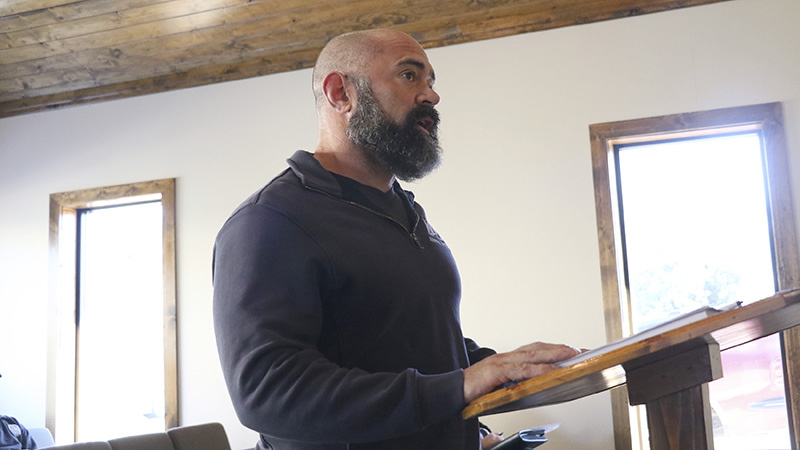 County resident Daniel Wise speaks to the Board of Supervisors about the positive experience he had using Kratom after a recent injury. Photo by Jeremy Pittari

A debate as to whether products containing Kratom should be banned in Pearl River County was discussed at Monday’s Board of Supervisors meeting.

The debate comes after a previous meeting where the Board of Supervisors approved a motion to draft an ordinance that could potentially ban the sale of such products locally.

Monday, Daniel Wise, a county resident, addressed the Board about his positive personal experience with the substance and why he decided to give it a try. Wise said that back in 2020 he was dealing with a shoulder injury he suffered while performing Judo moves. His shoulder hurt so much that he sought medical attention and got an MRI. Medical staff told Wise that the only thing that could be done to lessen the pain would involve surgery. Not wanting to go under the knife, and declining to take the opioid medication he was prescribed for the pain, his research brought him to Kratom.

He said he ordered his products through reputable online retailer and was able to sleep again on just one dose. If he had pain during the day, he said a half of a dose helped him get through.

After three months, the pain subsided and he quit taking the Kratom products. He said he didn’t have trouble when he stopped taking the products.

He added that several other people he has talked to about the use of Kratom products shared similar stories and he also knows a representative with the American Kratom Association who is interested in speaking with the Board.

Wise did say he is concerned about the products getting into the hands of minors, but does not want to see the local government intervene in a free market.

District III Supervisor Hudson Holliday said his research has shown that the substance can be addictive and he also does not want to see them sold to minors.

Holliday also expressed concern that there is no test to determine if a person was using Kratom products when an accident with injuries occurs.

District I Supervisor Donald Hart said that since Kratom products have been offered in stores near his barbershop business, he sees more people who appear to be high on a drug rolling around in the grass and acting strangely. Hart said he could only assume what types of drugs those people were using.

Hart added that there have been several times when he’s had to lock the door to his business while customers are inside so they are not pestered for money from beggars.

Detective Joe Garcia with the Pearl River County Sheriff’s Department said the Kratom containing substances sold in local convenience stores and smoke shops appear to be coming from a warehouse in Baton Rouge, but can’t say from what country the substances originate.

During a previous meeting of the Board, attorney Joe Montgomery was tasked with drafting an ordinance banning the sale of Kratom. Montgomery said he drafted his ordinance based off similar laws passed in neighboring areas, but noticed a loophole. Those ordinances focus on the sale of synthetic opioids, including Kratom. However, Kratom is not a synthetic substance since it is derived from a plant.

That sample ordinance was also sent to representatives with both municipalities in this county. Board President Sandy Kane Smith said if the two municipalities don’t join with the county to ban the sale of Kratom products, then the Board’s efforts will be fruitless.

County Administrator Adrain Lumpkin added that even though Pearl River County is dry, people who live outside the city limits still just drive to where beer is sold and bring it home.

Sheriff David Allison urged the Board to continue to work on the ordinance because a previous ordinance banning the sale of products sold as “Spice,” was effective in keeping it out of this area.

Lauren Goar also spoke about the need to ban the substance, saying her husband suffered withdrawals after using it, and even Thailand has banned the production of the plant.