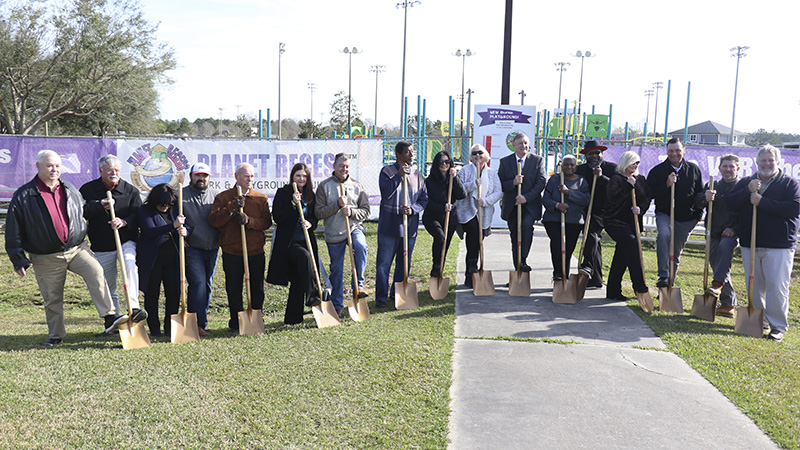 A ground breaking ceremony was held Monday morning at Friendship Park in Picayune on what is said to be the third largest playground in the state when complete.

The original Kids Kingdom was constructed in 1995 by a group of volunteers at the park, said Rev. Allen Hickman during Monday’s event. Made mostly of wood, that playground required rebuilding more than a decade later, funded by a local fundraising effort called Pennies for Your Park back in 2010 and 2011, according to previous coverage

Just over 10 years later, in 2021, the playground was in such a state of disrepair most of it was demolished to ensure the safety of the children, previous coverage states.

While the majority of the funding to construct the new playground is coming from BP grant funds, secured with assistance from State Senator Angela Hill and Representative Stacey Wilkes when the city hit a brick wall while applying for the grant, said Mayor Jim Luke, a match is required. After the city was awarded the grant, efforts to raise money for the required match began. That is where Luke said Sheriff David Allison and City Manager Freddy Drennan stepped up to the plate and hosted a Jail and Bail fundraiser and a raffle for a high-end seafood boiler. The Jail and Bail generated about $30,000 in matching funds while the boiler raffle raised about $12,000. Luke said a gumbo contest to raise more funds is in the planning stages. Luke also thanked other legislators involved in securing the grant and said he appreciated the various support the city received from the Lower Pearl River Valley Foundation, Picayune Main Street Inc., Greater Picayune Area Chamber of Commerce and the Pearl River County Board of Supervisors.

To determine what kind of playground to build to replace the old wooden structure, Morris, Parks and Recreation Director Trevor Adam, Drennan and Assistant City Manager Harvey Miller toured other playgrounds in the region and spoke with a number of companies, Luke said.

Now a colorful playground is being erected where tennis courts once stood within Friendship Park. The new playground will include equipment designed for children with handicaps so all children can enjoy a day at the park. Other additions to the park that will be funded by the BP grant include a new restroom and concession stand, two new tennis courts and additional parking.

Luke said there are also future plans for more additions, namely soccer fields that will have artificial turf.

The location where Kids Kingdom used to be converted to house a number of pavilions so families can hold parties and gatherings at the park.

According to previous coverage, the playground is expected to be complete in three to four months.

Highway 11 widening project may be complete this year,…